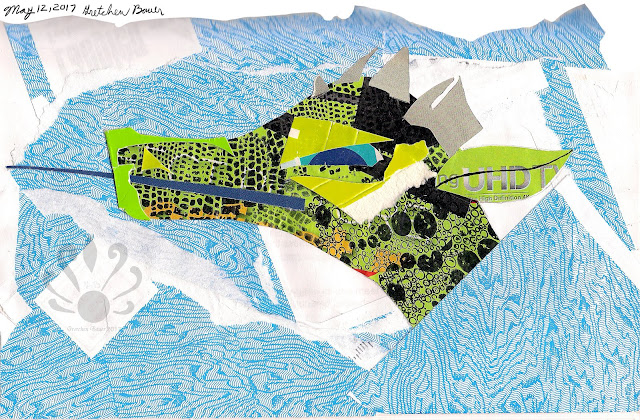 Continuing to find odd inspiration in paper scraps, I put together some sea dragon collages in my dragonfly journal.

The waves were made using security envelope texture, and parts of the dragon are green card stock from packaging. The rest of it is made from flier textures with a bit of reptile skin stamping I applied using black Staz-on ink. 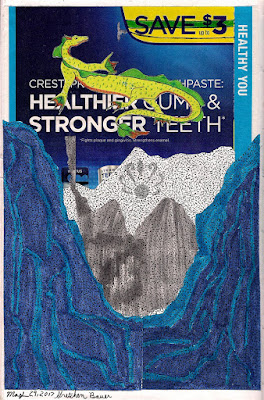 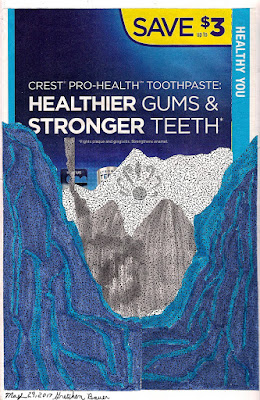 Beneath the waves the sea dragon lives among mountainous ocean rocks, sometimes swimming up from the depths to curiously observe the boats that float by.

I kept a scan of the background (right), and then added in details to the boat, along with gluing down my hand drawn dragon (left).

Image was created using marker, jell pen, and black pen, a flier image for the background, security envelope texture for the rocks, and some drawing on a bit of green wrapping paper. 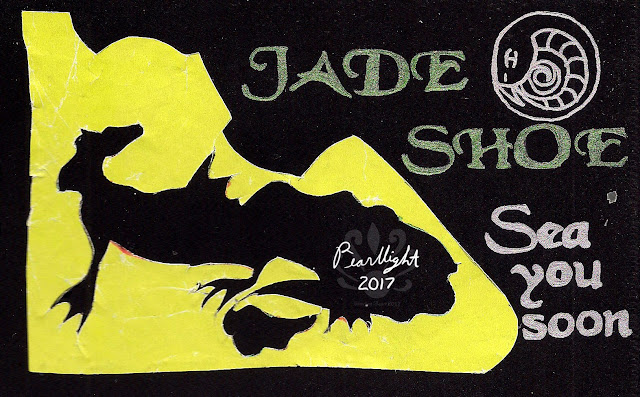 I did an extra collage using the reverse part of the paper I cut my dragon from. This one was done in the Beware Poison journal.

This page was something simple based off a story idea I had relating to some characters who are part of a gang called the Jade Shoe. One part of the gang has a seaside division and their gang symbol is of a snake and a sea dragon.
Posted by Pearllight at 7:13 PM No comments: 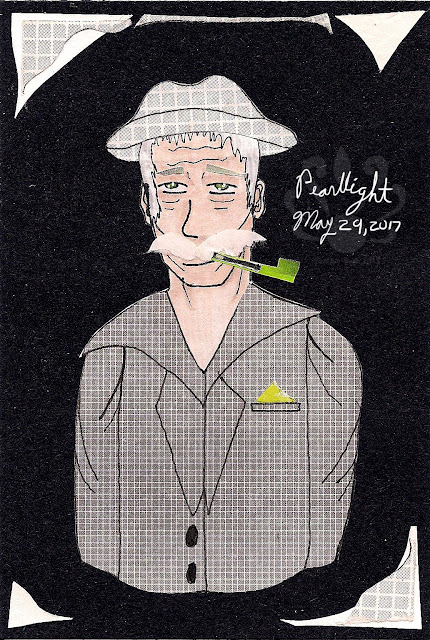 The collage came out of the scrap of paper that looked like a "Yeahmustache, and the name came from the green pipe which was an odd shaped scrap. The smallest pieces of paper used in the mini collage are the man's eyebrows.

Detective Green Pipe may become a silly icon character in one of my case file books, one of which has quite a few things added to it already, just needs some writing here and there. 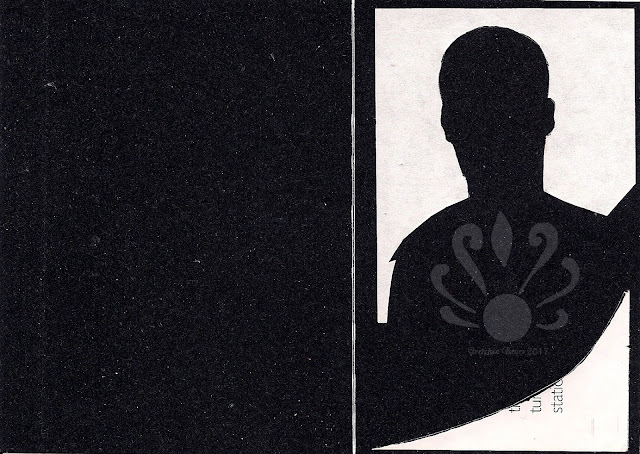 
Some reverse silhouette options pulled together as a mystery man card for a case file journal. The paper of a man's silhouette is the refuse from where I cut out the drawing of Green Pipe.
Posted by Pearllight at 2:16 PM No comments: 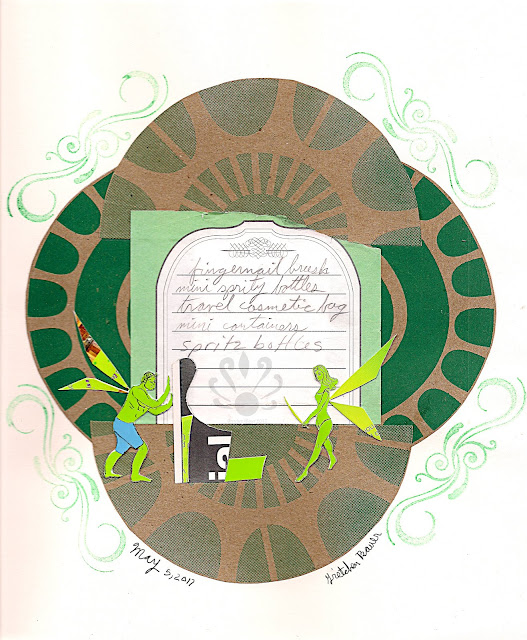 In the throne room within a teapot, the playful pixie king hides behind the queen's throne, waiting for her to sit so he can tickle her sides.

I had a bunch of little scraps lying on my desk after finishing several larger collages, and found it a fun challenge to use these tiny scraps for mini collages of bright green pixies, their actual size no bigger than an inch to an inch and a half.

Bits of Fios ads, magic eraser box, fliers, grocery list, stamping, and parts of a paper bag were all used to create three pixie based pictures, each one done in my dragonfly journal. 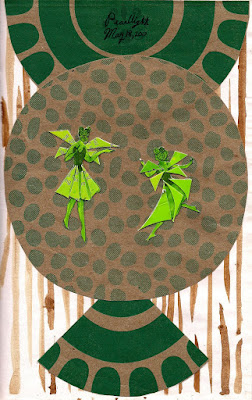 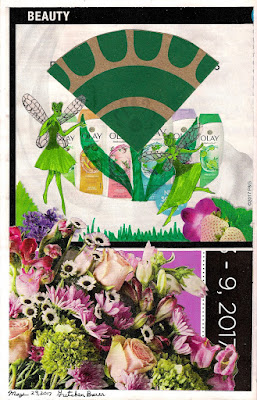 
Within a display cupboard, green pixie friends meet on the surface of a golf ball propped upon a stand. Created using parts of a paper bag, a wood texture stencil and brown watercolor paint, scraps of paper, and hand drawn fairies colored with marker.

Outside the pixie palace grounds there's a large flower much like a tree, and past that there are many tall buildings made from shampoo bottles the pixies live in. Surrounding this land are flowers in shades of pink, green, and purple. In the middle of the city, the teapot palace awaits.

The pixies for the palace grounds collage are the originals before I made copies of them for the golf ball meeting. Their wings are made from scraps of vellum, accented with pen. Other elements are all from fliers, the flower is part of a grocery bag, and the accents are done with green marker.
Posted by Pearllight at 1:50 PM No comments: 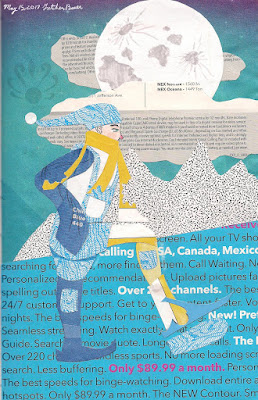 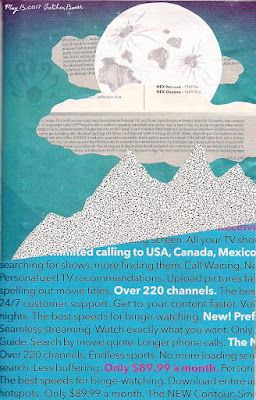 
This may be one of my more favorite collages in the dragonfly journal so far. It all formed from a simple thing like a blue piece of scrap paper that looked like an elf shoe.

With a bit of hand drawing for a bundled up face, Le Plume marker, some tracing paper cut outs traced onto paper scraps and flier images, a bit of random paper lying around, and security envelope textures, I put together the journey up mountain.

The background was nice as is, so I made a scan of it before adding my bundled up elf figure.

Maybe this overall wearing, bundled up winter boot trudging elf fella lives at the top of this steep, icy hill. Hope he and his pom pom tipped hat make it home safely.
Posted by Pearllight at 2:20 PM No comments: 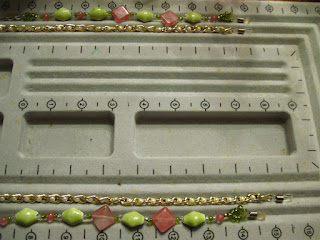 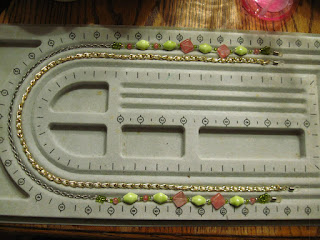 You would think I would manage to make a gift for Mom during her birthday or some other holiday, but I always seem to find myself making her something for mother's day instead.

A few years or so back I had help with making Mom an eyeglass necklace. It turned out pretty, but we hadn't accounted for the weight. The rose quartz and glass beads weighed down too much on the glasses, and Mom stopped using the holder because of it.

Finally, a few years down the road gave me an opportunity to find a pretty chain that's made of light weight metal, and accented with plastic pearls. this seemed like the right choice for an eyeglass holder, light weight, pretty, and snag free unlike something beaded.
There were still some eyeglass holding ends for this project left in the findings box.

You can see above in the pictures, the new and old eyeglass holders. I had to link a few chains together, and felt so oddly satisfied when I was done. 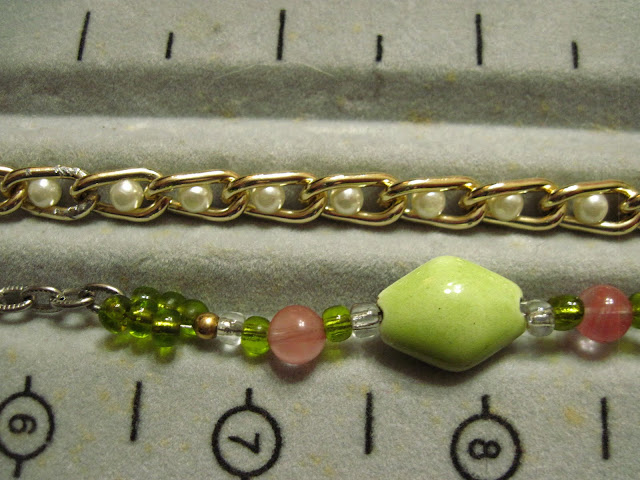 Here's a close up of the pearl accented chain next to the original bead and chain holder. The only unfortunate thing is that the metal of the chain scratched easily, and one of the links where I had my first try at connecting two chains together got a bit chewed up (shown left in the image).
Aside from that flaw, the rest of it turned out pretty well, and I feel warm to see Mom making good use of it.
Posted by Pearllight at 10:48 AM No comments: 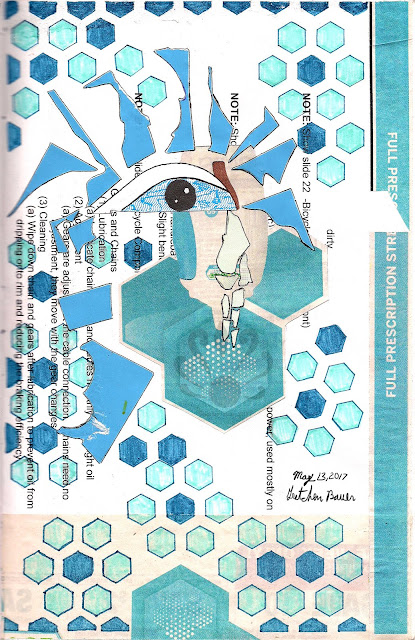 Scrap collage created in the dragonfly journal. I had bits of blue paper in different sharp shapes left on my desk after multiple other projects, and as I played with them I thought of glass, and also found some scraps that looked like an eye with upper eyelid.

I found some other pictures to go with the theme, used flier images, paper scraps, a bit of security envelop, stenciling and marker, black pen, all built upon a sheet of used printer paper.

The theme of this odd collage is meant to represent a sharp awakening to something truthful, or possibly a representation of insomnia and disturbance to noises in the night. It could also represent crusty eyes and eye pains (like an advertisement for eye drops).
Posted by Pearllight at 2:23 PM No comments: 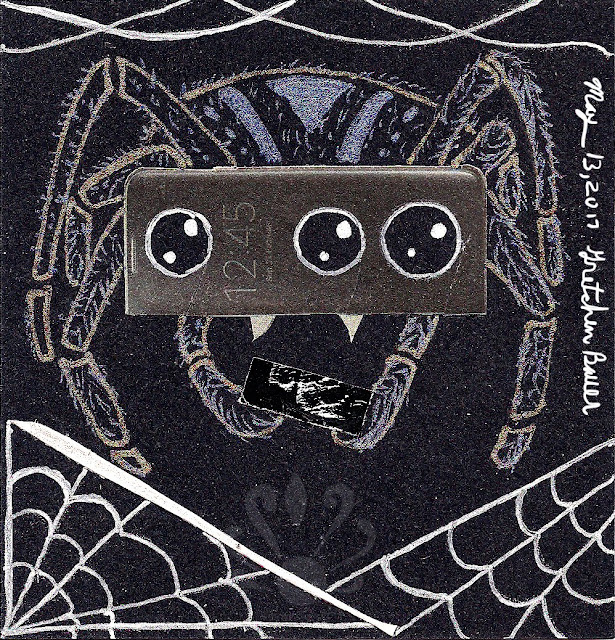 
Organic meets mechanical in this mini collage. The idea of a strange looking spider came from a flier scrap with circles cut out of it. The scrap was used as texture for other projects and is of a cell phone with the time showing. This is where the name came from.

I made this picture to use up little bits lying around, like a white strip of paper, a black block of something the spider thinks looks yummy, and super tiny light gray pieces of paper became the fangs.

Most of the picture was drawn using jell pens, and I added a bit of sparkly jell pen to the webs, but the scan doesn't pick up on sparkle well. The colors of the metallic pens used for the spider are also a lot brighter in real life, as shown below in a photo version. 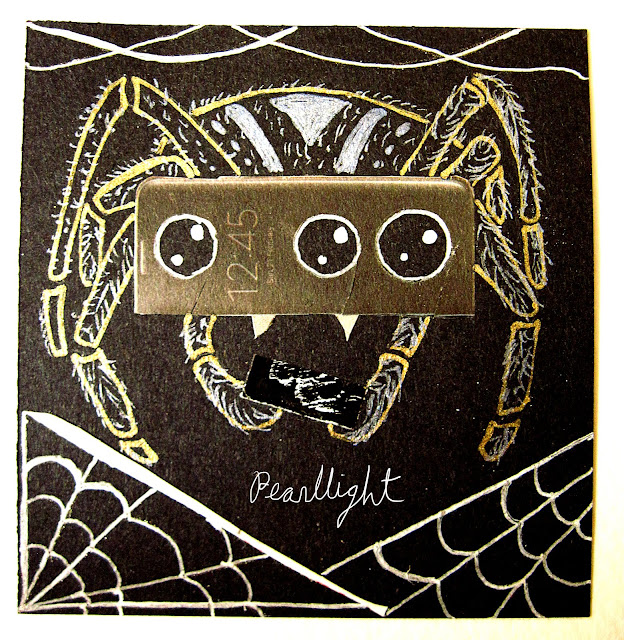 Posted by Pearllight at 1:31 PM No comments: 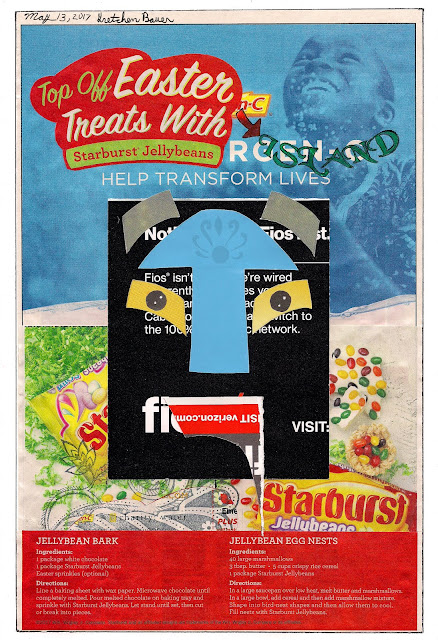 
During my shuffling through flier scraps on the desk, I couldn't quite decide on what to do with a blue arrow I made and some excess squares of gray and yellow. After a bit of playing and rearranging, I found a face within the shapes and created a drooling tiki man.

A few backgrounds of water and Starburst Jelly beans matched the colors of the face, and this inspired a concept for Easter Island themed jelly beans.

I think it would be fun to have an island themed bag of jelly beans in all the tasty tropical flavors like coconut, pineapple, kiwi. dragon fruit, banana, jack fruit, and whatever else.
Posted by Pearllight at 1:08 PM No comments: 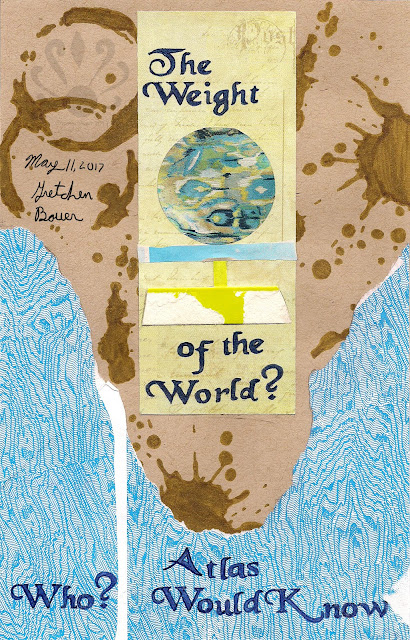 I was going for an oceanic, map sort of theme, the idea coming to mind because I saw a scale for weighing while playing with paper scraps, and wanted to put something round on it.

There's a bit of a pun within the message. The weight of the world can have a double meaning, but in literal terms, who knows how heavy the planet is. Atlas is the mythical god in Grecian stories who's said to hold the world. Atlas also sounds similar to the word alas. Basically, Atlas would know the weight of the world, but alas who knows how much of a burden it is to hold. :P
Posted by Pearllight at 9:20 PM No comments: 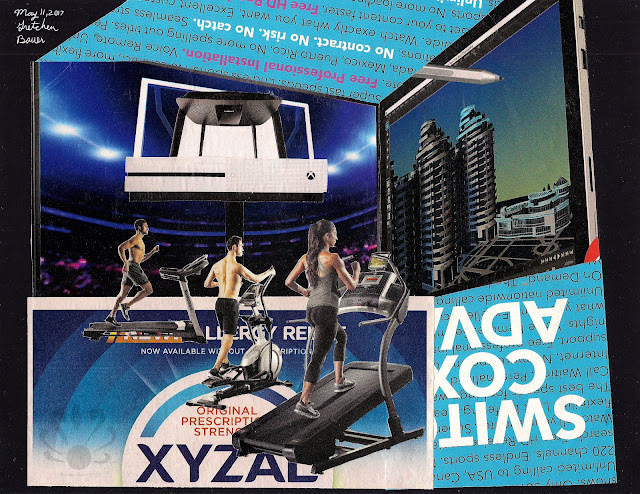 
Sometimes a random collage will form at the table when I just don't know what to make, but find images I like the look of when they're together.

I wasn't sure at first where I was going with the textures and backgrounds, but I saw a window with a city outside, and imagined there to be some kind of indoor cavern with a lookout tower overseeing this large gymnasium room full of fitness equipment (hence the name). 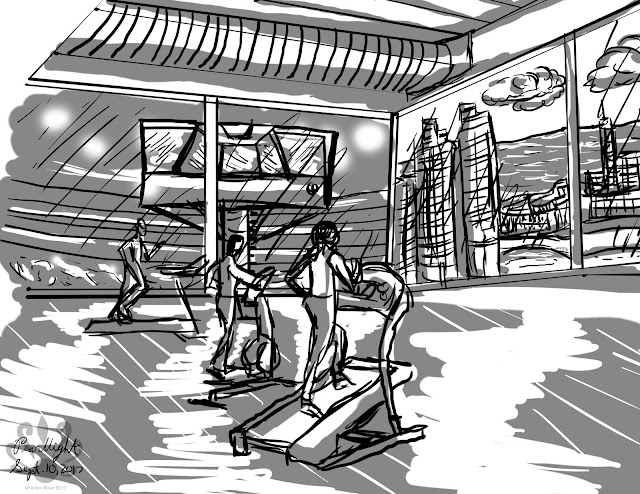 I wanted to further display the idea that came from the collage, which was more so of a concept than anything. A sci-fi fitness center seemed pretty cool when I thought about, so I sketched out the place in a quick digital warm up.

The floor is polished stone, the window shows a city and the water, and in the back there's a large window showing the indoor rock cavern where mountain climbing and other extreme sports can take place. All of it can be overseen by the security tower with it's look out room, platform, and holographic screens that occasionally show news or advertisements.
Posted by Pearllight at 2:46 PM No comments: