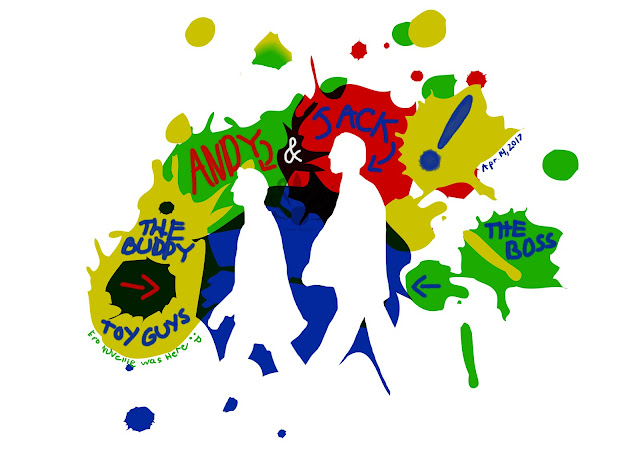 Onto the developing artsy adventure between myself and a friend. This friend has written a few self published books, her first being called "Action Men With Silly Putty". I had started up a little writing experiment for the sake of brainstorming and a bit of fun, introducing the concept of collaborative writing in google DOCs. It's essentially a method of slow pace improvisation acting through text, something some would call online role play.
I'm very familiar with the subject, my friend on the other hand isn't, so we both had a bit of fun for a week or so, and finished the first half of the experiment shortly after midnight on April 1'st.

The project took place in her world, and I introduced some of my own characters into the setting. The first experiment was more so a joke that conveniently ended on April Fools. After what became the April Fools special, we started up something a bit different after that, and changed up a few things.

I can say that since then there's a lot that has happened in the story, and it's been developing into something of a mini story between my character Eero and her characters Andy and Jack.
We've been connecting through joint writing, and we both have been thinking about each others characters; scheming, dreaming, sharing concepts and songs.
She even went ahead and made a private Pinterest board for the both of us to add pins to that inspire the story we're working on. That was something new to me, I never considered using Pinterest as a storyboard before.

Currently we're at a stage in this mini story where Eero was hired by Jack and Andy, and was given the job of painting the toy company walls. I had this concept where he's going to have an oops moment in the near future, and the guys are going to get splat with paint as they walk by. I made the concept image shown above to express what I see Eero doing with the mess on the wall. I've even been sketching out the image concepts of what Eero has and will be painting on the company walls of "Out of the Box Toys", one of many settings in my friend's fictional world which my character has had the pleasure of being part of.


I've been developing mystery and tension for the story, bringing my friend along for the ride while I introduce a down to earth version of my characters and villains made human. The adventure of E and Andy involves Eero (once Erozion) as a young greaser who meets Andy on a night he's caught speed painting a wall in the toy company Andy works at. 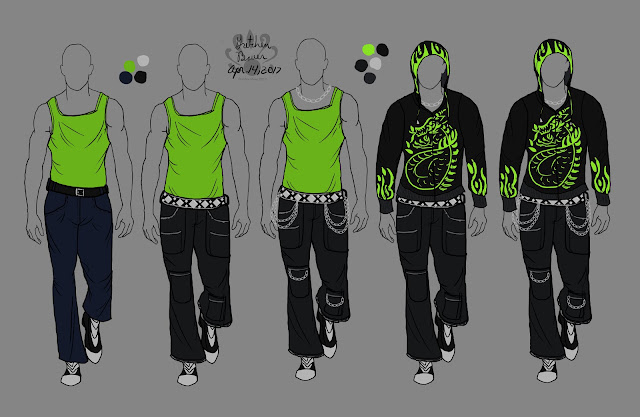 (E's Green Beat and Jade Jacket)
I had it planned to introduce some of my villain concepts into the story, only I gave them a different name and made them into a black market biker cult called the Jade Shoe. We have it planned for Andy to get captured by this gang who's after my character, and E will go to save him. He'll need a disguise, and I've gone ahead and made some fashion designs for E in the story, including the Jade Shoe hoodie design I see him wearing when he goes to save Andy.

Eero has his normal outfit with his blue jeans, green tank top, and biker boots. Then I went through design stages of punk clothes fit for a biker club with theme colors of green and black.

I've also thought about many interesting things, like how Eero will get injured when he goes to save Andy, and that means the guys will find out how much E hates hospitals. This concept has brought up the idea of how punk clothes can be used against the wearer, and how Andy and Jack may have to use Eero's own disguise against him in order to help him.

Currently all those ideas are ifs and maybes of what could happen, assuming the project reaches that point. Like always, I'm simply inspired artistically by an experimental writing project. 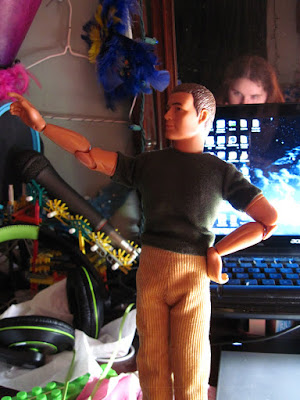 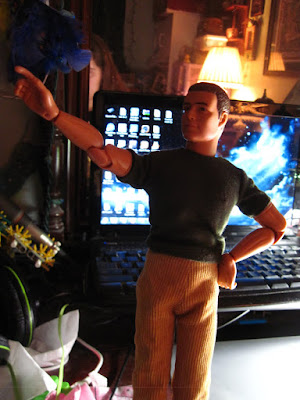 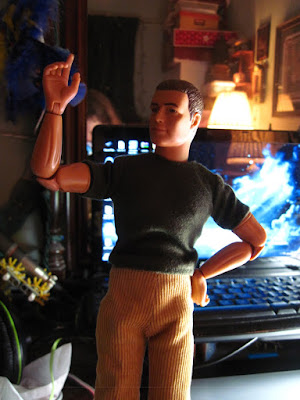 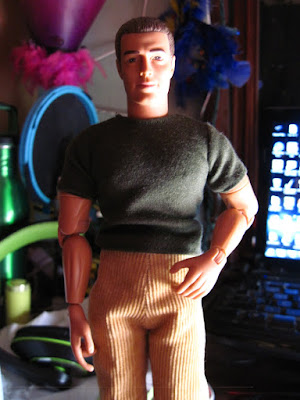 The E and A story has inspired plenty of art ideas including small clips of E being silly, but there's also one thing which was mentioned at the beginning parts of the story. Eero was wearing a shirt with one of the company's toys on it, a design he made himself. That character was given a name by my friend. She decided to say it was a graphic T of Blaze, a character like Batman, but not.

I decided to take photos of G.I. Joe posing as reference for the sake of designing the Blaze T shirt to some degree of how I saw it in my head. My figurine will be a base model for this if I ever get around to actually playing with the idea. For now it's just a concept.
Posted by Pearllight at 10:50 PM No comments: