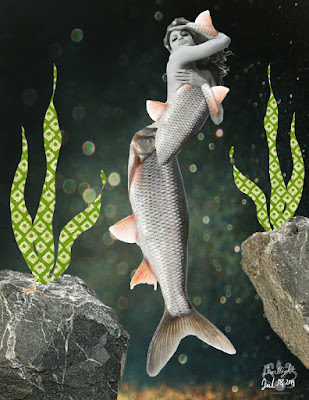 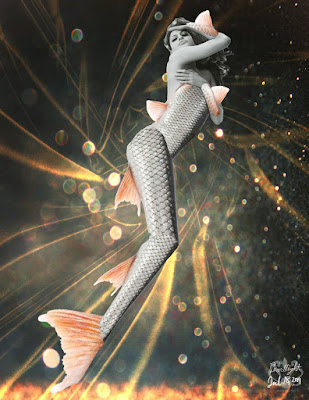 This is a long overdue digital collage that was meant to be part of the Mermay collection. a Mermaid image for July is still fitting though.

I chose a gray fish to match the grayscale image of the mermaid. The touch of peachy pink seemed like a nice addition with the gray, so I kept those original colors of the fish. I used some scrapbook paper designs from Far Far Hill as the background and seaweed. I also used a texture background that I put together myself to create swirling energy in the "Transformation" picture. The rocks and fish elements were selected from pictures found on Google images.

I didn't originally intend for the Calvina mermaid to have three different versions, but as I played it happened, and then I got some small story ideas behind what each picture is about.

"Gray'scale'" is Calvina in her basic mermaid form. The "Transform" image is a moment when she's magically changing into something new, maybe she wanted legs. 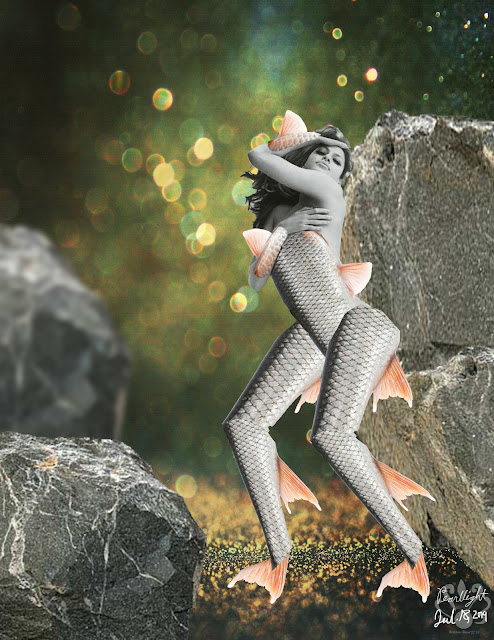 After the magical transformation, she did get legs, but not in the way she expected. She was still like a fish, but with fin feet and the ability to walk on the ocean floor, or venture onto land and become amphibious.
Here she walked onto shore, leaning against the beach rocks to support her newly formed legs. Her fin feet sunk into the damp sand as rain came down around her.
Posted by Pearllight at 12:31 PM