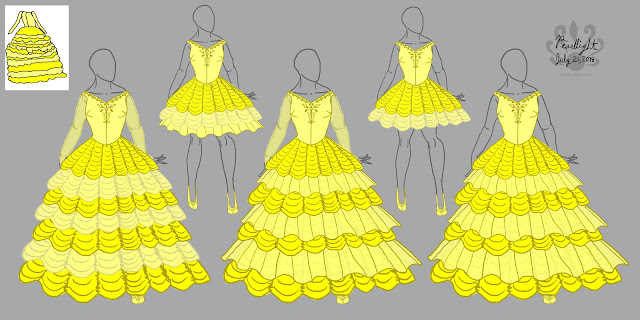 In my old kid art files there's a yellow dress from Feb. 2, 2005 which was labeled as "pretty". It's obvious that design was my own attempt as a kid to draw the dress from Disney's Beauty and the Beast.

One thing I noticed that was different about it was the fact the layers were smaller, and I added sleeves. It seemed like a fun thing to take and remake, and I actually like the way this buttercup yellow ballgown and its other variations came out. 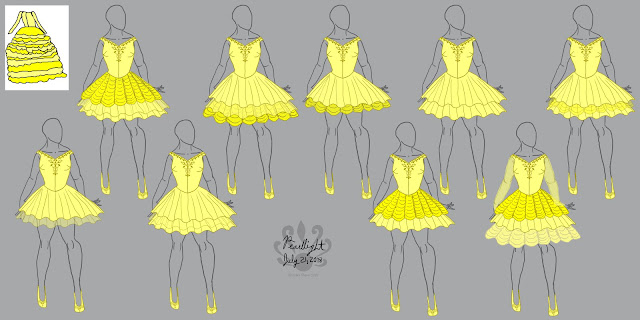 After playing with a few kinds of ruffle styles and subtracting the sleeves, I put together the shorter dress series which could easily become a different theme based around buttercups. If I added a bit of brown the designs could have also become chocolate covered banana themed. 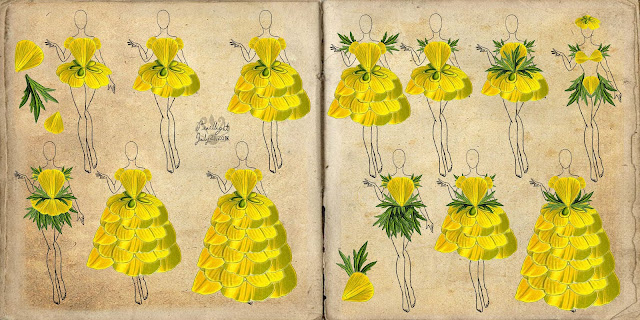 I wanted to further play with the idea of a gown that's truly buttercup themed and not so much Disney based. Applying the same general dress concept I did some collage fashion using botanical clip art of buttercups to make different dress variations for a buttercup fairy.

Belle's yellow dress gave me the idea to explore this concept, though I think I prefer the shorter versions of these designs over the long, puffy gown.

I chose to display these designs on a book page setting to make it feel kind of like a nature study, the research of different fairies and what they wear.
Posted by Pearllight at 8:22 PM