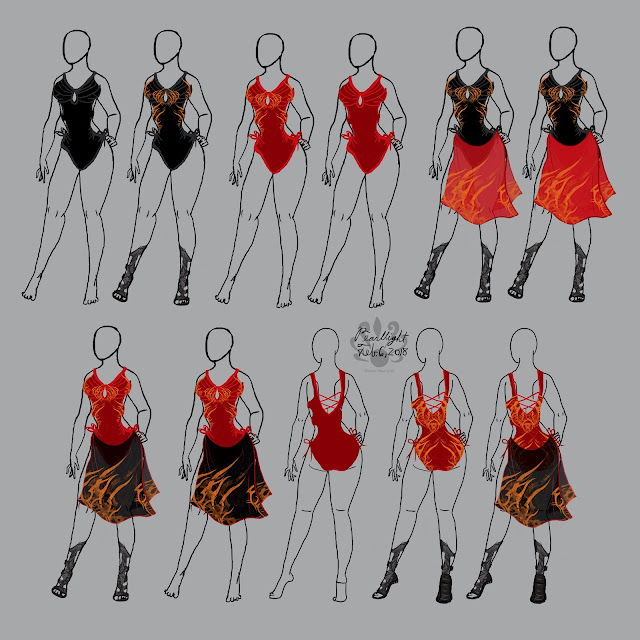 As usual, my fashion designs commonly come to mind while I'm working on the MN-I role play, and designing wardrobes for different characters. Coaline-pronounced (Coal-leen) has been one of the characters I've been focusing on.

Her theme is fire, and there's an episode coming up where she's going on a date to the beach with Seph. I thought to myself how often the characters in the story are bound to visit the beach since the story takes place on an island, so I wanted to make a series of bathing suit desigsn for each of the characters I play most.
This was also an excuse to think up designs on what Coaline would wear to taunt during her beach date.

The starter designs (made on the sixth of this month) above involved either a black suit or red suit, with complimenting sarong in the reverse color. I also explored the designs with and without flames. Coal also has a pair of black sandals for days on the sand. 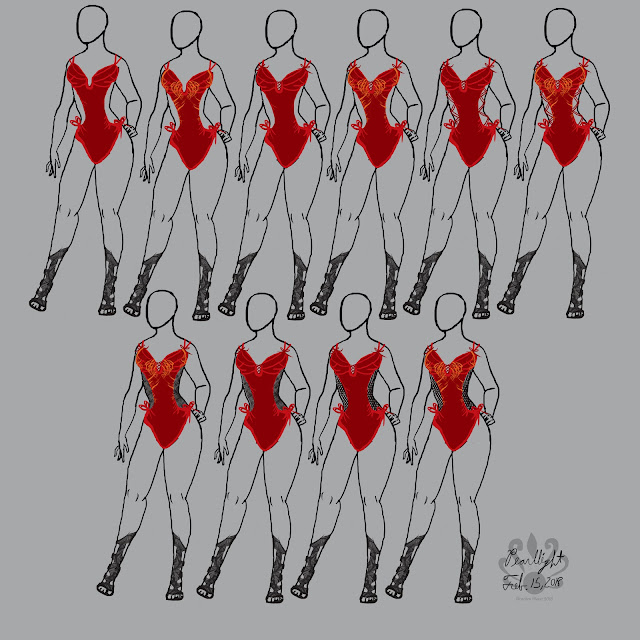 After designing her first set, I let the idea sit for awhile, then came back to it today for adjustments. It occured to me that Coal and her rebellious side might be even bolder than what I had first imagined.

Her wardrobe tends to involve peeky spots and low cut lines with strap or net accents. the first design has some peeky spots, but still didn't fully say Coal to me. I went in and tweaked the base of the suit by angling the top, changing the straps, making a more defined curve in the sides, then pulled it together with the choice of strap sides, or net sides in either fine nit or large nit. And again the choice of flames or no flames as a pattern.

After talking about the designs with Tarrok, we decided the character may have more than one suit. One for business, one for hanging out with friends, and maybe two others for leizure. The one with a black net side likely is her normal business trip or hanging out with anyone suit. The one with the strap sides is more like her leizure time suit which she'll wear because she can with whoever she wants to taunt.

I designed  the suits specifically to show Tarrok, since it's easier to show a picture than describe an outfit through text. This was the fun way to let Tarrok know what his character Seph will likely get to see during his date.
Posted by Pearllight at 4:14 PM