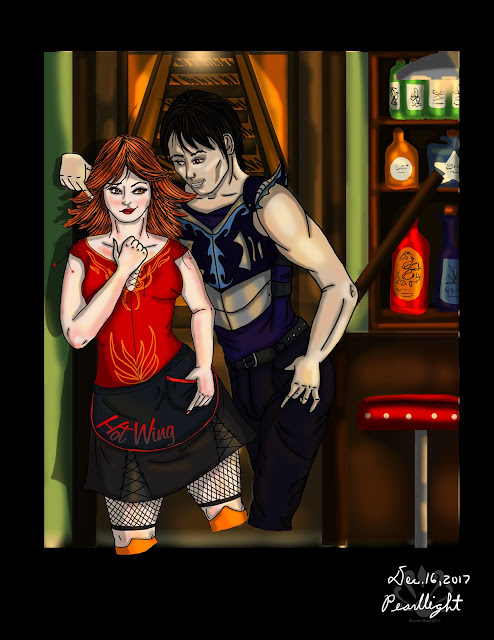 Sephiroth and Coaline, two rebel characters. These characters are from a role play which has the potential to become an actual novel.

I dreamed of this scene multiple times in concept, imagining this to be a moment where Seph is playfully flirting with Coal after she's gotten use to him and doesn't mind him coming around to her sports bar, the "Hot Wing". This scene takes place at the entrance to the business counter and back of the building where Coal's apartment stairs are. On the other half of the bar to the right is where her business kitchen doorway is. That's just the general layout, but I only made a small peek of the place. 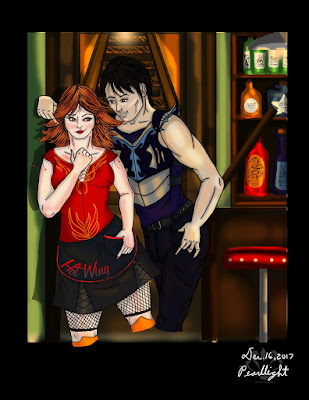 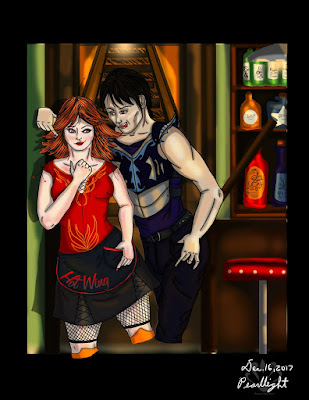 I went through some different stages with Seph and his expression. These two versions came before the official one. The one on the right was actually the original.


This project was started back in Novemeber on the fifteenth. I put if off for the longest time because I lacked the motivation and confidence to finish the sketch. Today I finally got back the motivation needed.

I was excited to make the picture, since this is the first time I've tried drawing some characters from the MN-I role play.

After I shared the picture with Tarrok Frost, I got some healthy suggestions on how to improve the piece. He mentioned that Seph looked kind of creepy, like Seph was going to do something terrible. He's meant to look a bit nicer despite his dark history, and does after all want to get on Coal's good side.

I took Tarrok's advise, and adjusted Seph's cheek bone, along with his smile, and eyebrows. The eyebrow part I figured out on my own. After tweaking things and looking back on the original, it made me laugh, because all I could hear when looking at his face was a drunken slur of derpy greeting, "Haiiii thar bootiful. *hick".

He did look spooky, and that was at first how I saw him in a day dream, but then I realized he's a bit smoother than that as a character, while still being half awkward. 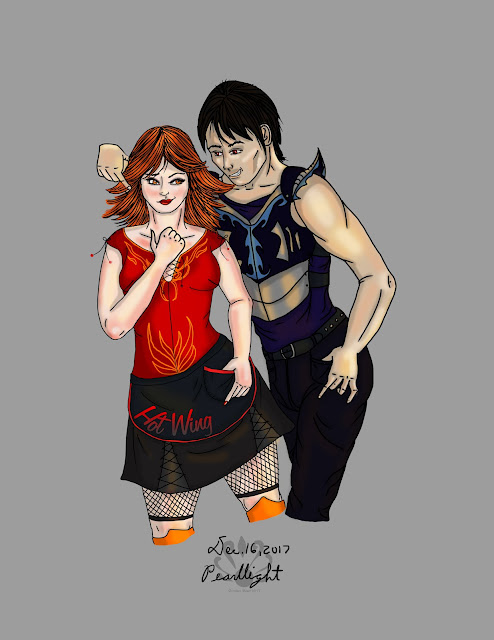 My second adjustment to his face ended up as a smaller half grin. I kind of like this version still, seems a bit more mischievous. 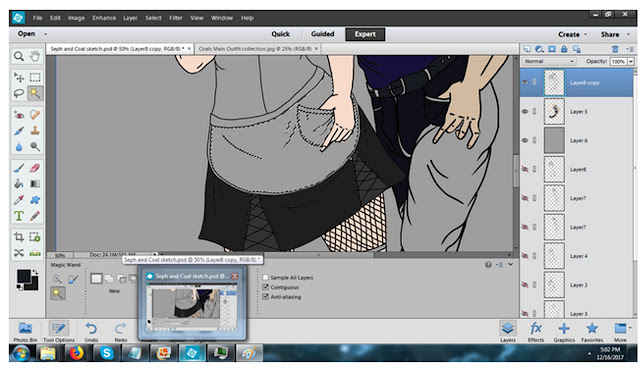 During my work process on the piece, I started outline work in Firealpaca, then did the coloring in PSE12. The screen froze at one point, and I took a screen shot to preserve some of the color I had laid down, realizing I didn't save my progress and would have a risk of losing the coloring if the program suddenly crashed. 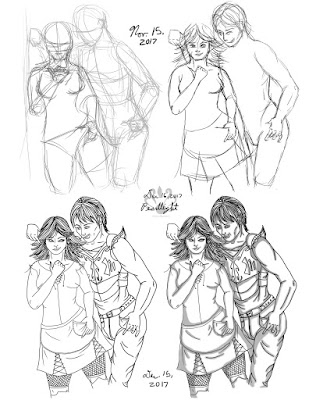 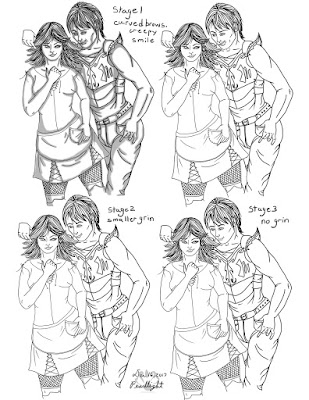 I made some sketch stage pages, starting with my base sketches and beginning outlines (left), and then made a page of the different outline stages of Seph's adjustments (right).

Tarrok liked the first stages of Seph as a sketch in the upper right corner of the left page. He said I should go with the cheek bone I did there, and the smaller smile. It made me see that I should go with my base instincts during a sketch, and stick to the sketch as much as possible when making the actual art piece. 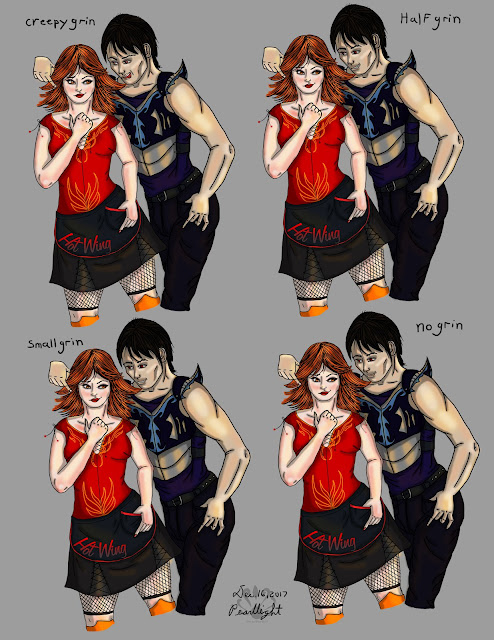 The final example panel was made to show the different moods of Seph's face in color. I shared this panel with Tarrok for his final opinion. He liked the small grin best, so I went with that one for the main image. Seph is Tarrok's character, so his choice of what Seph looks like in a scene is valued. 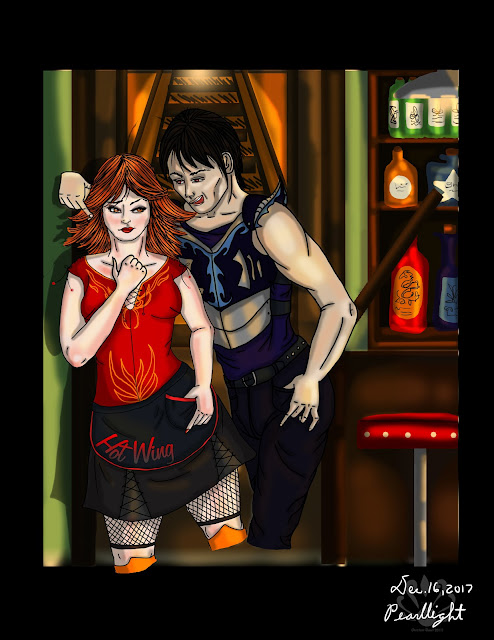 I wanted to play more with the expressions of the characters, specifically the version of spooky Seph looking at Coal.

I found out where the morphing tool was in PSE, and adjusted their expressions that way to give Coal a "seriously?" face.

I figured Coal would have this look at some point, and in an actual story circumstance would probably have this face if Seph was being weird. 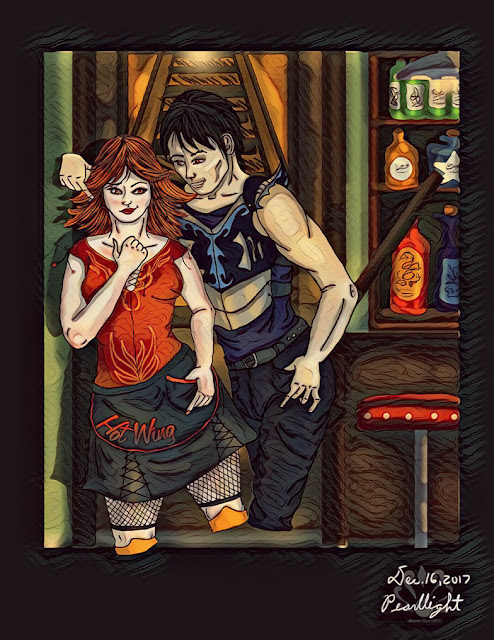 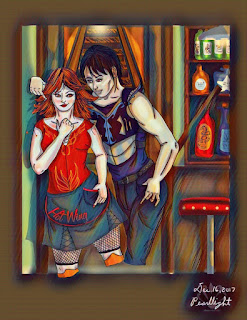 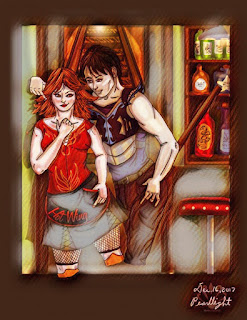 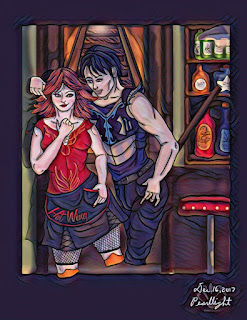 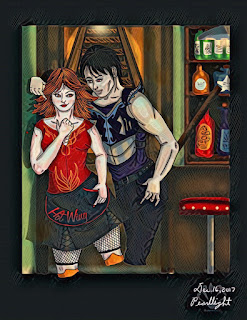 Playing with filters from a site called Lunapic. top version is the dark filter, next is the reds filter, then the blushred filter, monster filter, and acid filter. The reds filters are my favorites on these.
Posted by Pearllight at 8:41 PM