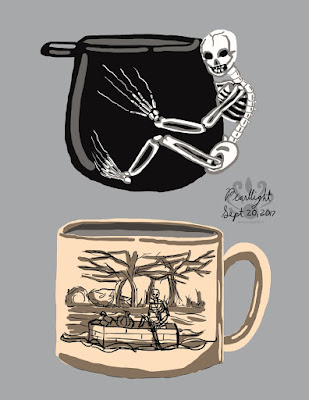 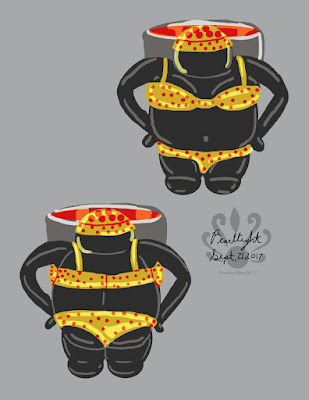 Over time I've had different mug designs pass through my head, and just a few days ago I got an idea for a couple Halloween based ones.

I've been searching for a new mug or two because my old ones are now no good. The search started online to see what World Market and Pier 1 were holding this time of year. There was a metal octopus mug which was pretty cool, and then this funny mug of skeletons playing music. World Market has different novelty Halloween cups at the moment, and my inner goth likes that sort of thing.

While I looked I saw a spiderweb cup and a skeleton hand mug. Those seemed pretty funny, but then a more inspiring idea came to mind. Yesterday I designed two mugs as part of a series called "Holding On For Dear Life" (left).

I imagined the handle of a black cup being a skeleton who's trying to hold on to the cup while you seem to be tugging it away. His fingers and toes leave scratches on the glass to look like he's desperate to hang on. The cup itself is meant to look kind of like a cauldron.

The second idea that came to mind was a standard picture print on a normal mug. It might be called "Wet Your Wish Bone". The sketch is of a skeleton man using one of his lower legs as a paddle for his coffin boat floating down river. This sketch on a mug might be interesting as a postcard, something I'm going to keep in mind.

The other design I've had in mind for a lot longer than novelty Halloween mugs is the joke mug of a fertility goddess wearing a yellow bikini. The idea has been on the concept list ever since I thought about how someone in the family likes short, fat cups, and an inside joke relating to how that person is built like a fertility goddess. I thought it would be funny to have a short, fat cup with her in mind, but in a more comical spin of the mug being slightly more decent and not full on naked, just a size too big for her undies. :P
The design could be better, but I haven't sketched out the solid, no handle version yet.
Posted by Pearllight at 5:39 PM