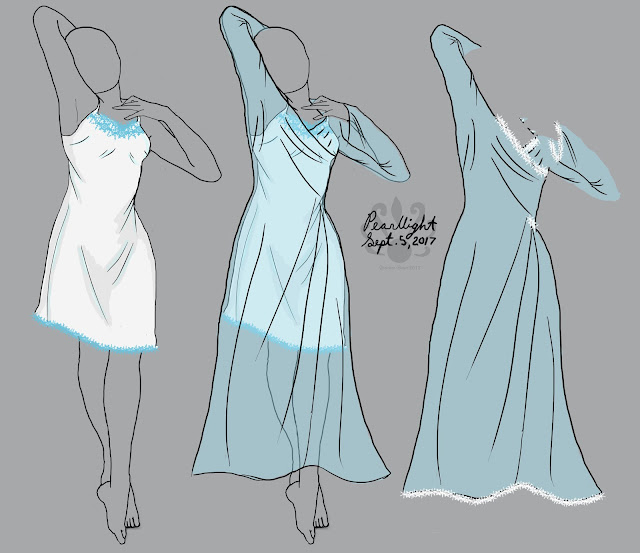 In a matter of four days, fashion inspiration hit my mind. Ever since I started the Mata Nui Investigators role play (which will probably get a different name someday), my inspiration to design and share has kicked back in.

In more recent scenes, describing my character Sicline's clothing choices, I was inspired to draw out one of her favorite satin nightgowns. I imagined it being a medium length, silky white blouse design, with light blue snowflake patterned lace accenting the neck line and bottom edge.
Sicline also owns a pretty, light blue robe of sheer material. I had thought of it awhile back in the role play when Sicline was just engaged to Kyrian, a character acted by Tarrok Frost (that's his code name). I wasn't sure whether or not it should be plain or lace accented, so I played with both ideas.
more than likely she owns the lacy one. The design is partially inspired by an actual robe I still have, which unfortunately has become grungy from years of use. 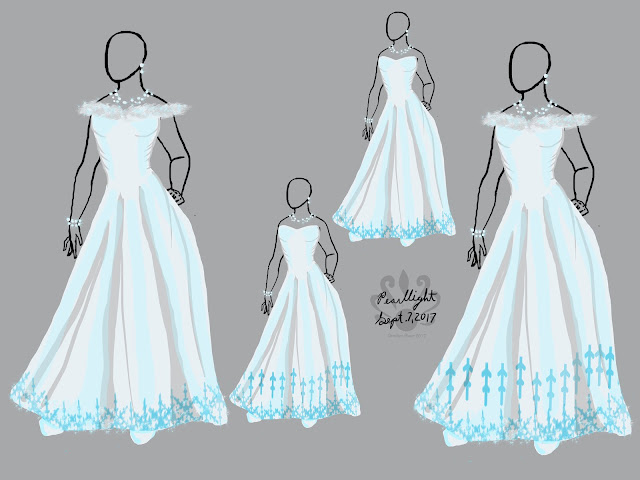 As I read back to before Kyrian and Sicline were married, I remembered a design I had in mind of what Sicline wore on the day of a duel between Kyrian and Markus (a prince who was betrothed to her against her consent). The duel was to decide who got to have her, and Sicline's mother insisted she wear her snow feather gown for the event.

I thought of two different patterns for the bottom of the skirt, accented with sparkles. The rest of the dress is silky and has a light blue, metallic sheen to it. The neck line is accented with feather sleeves or no sleeves. The feathers would be like a downy feather of an ostrich, lightly spritz with clear sparkles.
To top off the dress, the smaller details would be metallic white shoes, or maybe clear blue crystal heels, pulled together with sparkling white crystal jewelry. 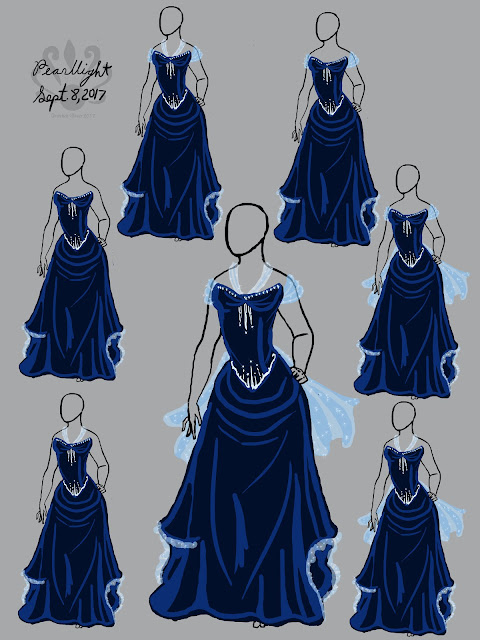 Among the designs mentioned in the story, Sicline also owns a dark blue gown I call the evening snow star. I played around with this design in several ways, trying to decide on which version was most pleasing. The sleeves and fluffy back all kind of came together randomly, but I liked it.
I imagined Sicline wearing this for an evening event at a fancy restaurant or an opera. 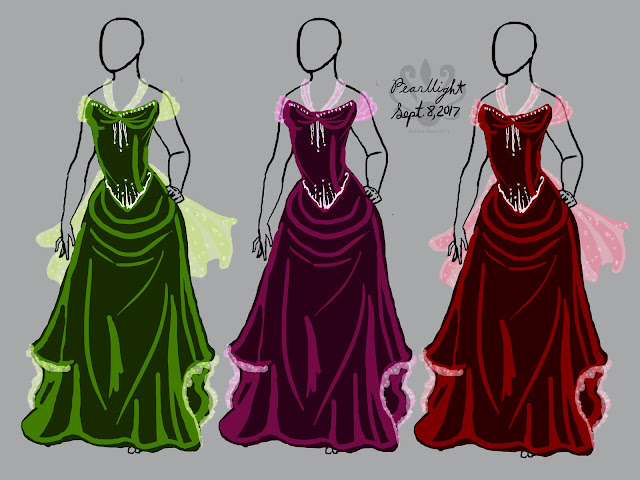 I liked the design enough that I played with color variations. I went with viewing it in green, purple, and red. This inspired other ideas, and I find I really like the folds of this design.
I call this collection the three sisters (elements of air, earth, and fire).

The pink and red one inspired ideas for my character Coaline, who's in line for possibly dating Sephiroth, another character of Tarrok in the story. Tarrok laughed slightly when he and I thought the same thing when looking at the dress. It's like an outfit Coal would wear if she were feeling girly, like a Valentine special.
He then mentioned it could be a dress Coal wears if she dates Seph. The thought struck a better idea as far as fashion for Coaline goes. She can be frilly, but in a more rebellious way. 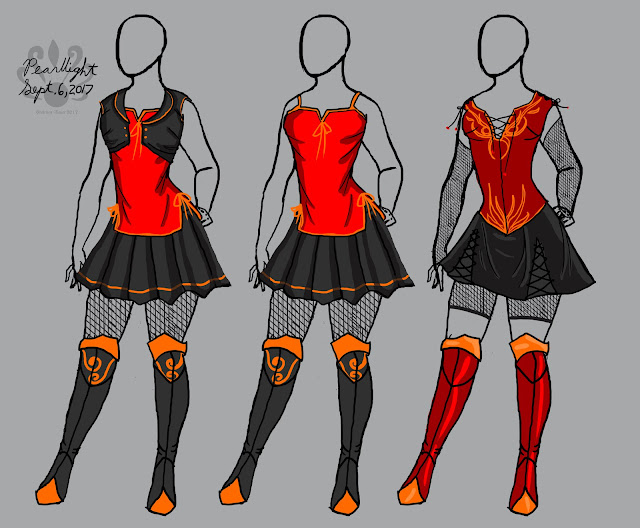 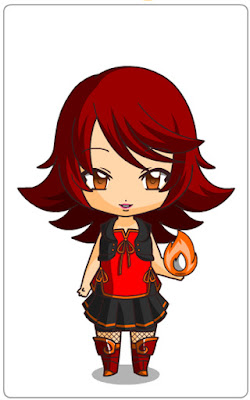 I designed a new fashion form just so I could work out Coaline's fashion schemes. her main design is based off of a chibi I made of her in a generator (left), but the final design on the far right of the panel is her "fire fan" costume, a main outfit she wears at her sports bar.
This is an outfit she was wearing during a scene when Seph first saw her.
I really emphasized the whole rebellious fire type with a shadowy past through Coal's wardrobe, and stuck to using five basic colors. 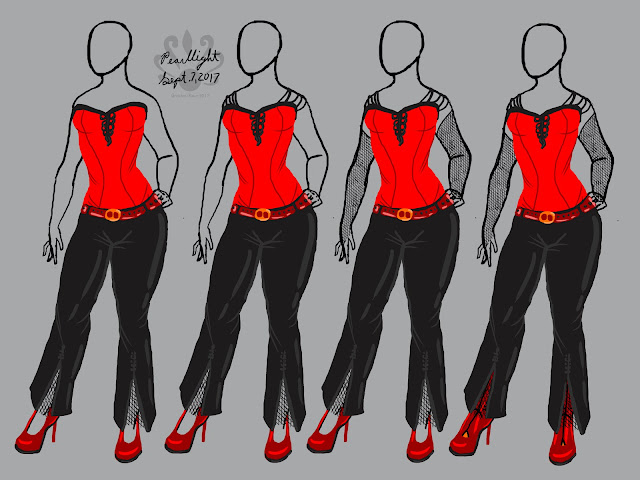 Coal is a wild one, so her style is meant to show that. For basic work days, being an explosive expert, or going on a simple date, Coal has her "fire fancy pants" outfit. The pants are black leather, good for hiding soot and preventing burns from happening as easily (since she lives in a volcanic region). They have a split in the front and are accented with black net. her red top is fitted yet stretchy, and I played with the option of no sleeves or with odd straps.
Her choice of accessories would be a pair of red heels or boots, and her black net gloves. 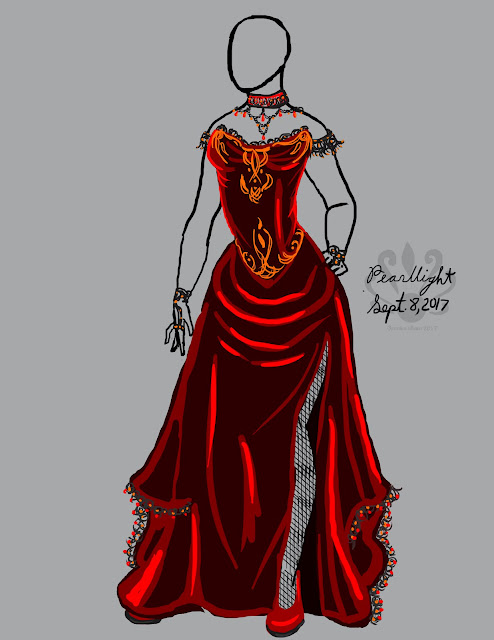 Now as far as Coal's fancy goes, I took the same pink and red design from before, and tweaked it to match Coal's style better. This is Coal's fire passion dress, a black lace accented costume with a bit of a teasing split up the side. The material would be color changing and somewhat metallic, accented with shining orange embroidery and worn with a black chain and lace ribbon necklace, along with matching bracelet gloves.
Posted by Pearllight at 5:32 PM