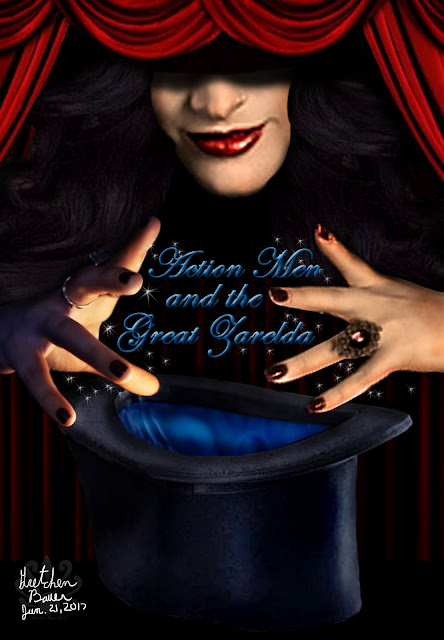 For nearly a week I had dreamed about a concept book cover for the upcoming second book "Action Men and the Great Zarelda" by Susan Clark.

I just wanted to play around with some ideas, and have a bit of PSE fun, so I chose to try a book cover concept based off of a story by someone I'm acquainted with.

I drew off what I already knew about her second book. Zarelda is an evil magician who wears a red dress, has black wavy hair, and a certain kind of seduction which is not to be trusted. All the signs are obvious at the beginning of the story, the first and several other chapters sampled on Susan's blog (that's how I figured out all the basic details I needed to know).

I aimed to make the book cover give you a sense of some mysterious danger that comes with the Zarelda story.


After finishing it I felt excited, thought how nice of a book cover this could be. But I knew this would remain a concept of inspiration, not to be used for Susan's next self published book.

One of the reasons for that is that the photos I used to create this digital collage aren't mine, but rather selections of different pictures from Google images. I used selections of two different people's hands from photos of fortune tellers, a selection of someones black wavy hair, half of someones face with the right smile, a heavily tweaked image of a magicians hat which once had gloves hanging over it, and an image of theatrical red curtains.

Even if turned into a painting by my hand, it would still remain just a silly poster. There were some different ideas that I could have played with too, but I decided to set those ideas aside instead of pursuing them for fun. Certain elements of what Susan was going for were things like a cowboy hat (a theme based off of items from her character Jack's wardrobe), blue feathers, maybe more of a body view of Zarelda. I had some interesting ideas in my head of what I could do, but decided to leave the ideas as sketches on paper for the time being. 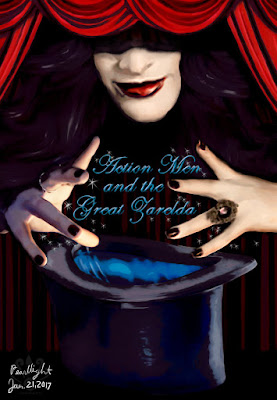 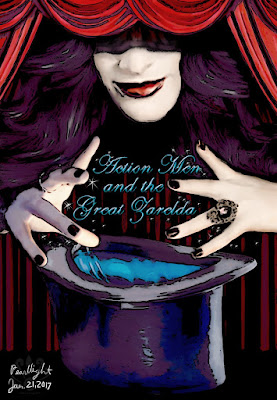 As I mentioned above, I considered making a painted looking version of the picture, and after some experimenting with new techniques I've discovered, the results were pretty fun.

Left version above is the 'painted' version, made by applying a cutout filter to the image, then a textures brush applied to the smudge tool. I had to hand smudge all the colors together. 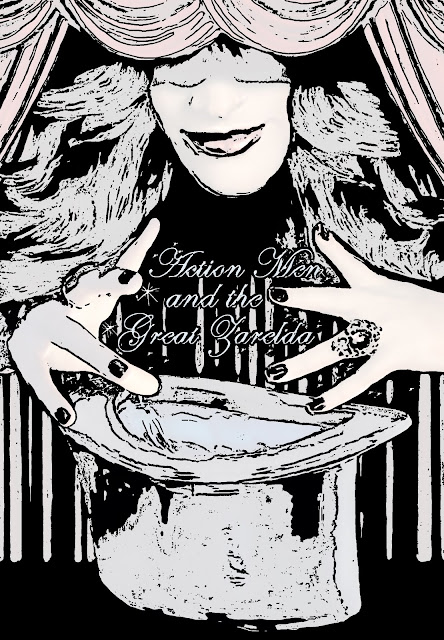 Right version above is the poster edition, where I applied a stamped filter to the image (the black and white picture on the left is what that looked like), then turned the blending mode to soft light. This layer was set above the painted version to get this effect. 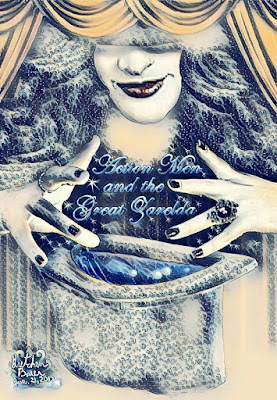 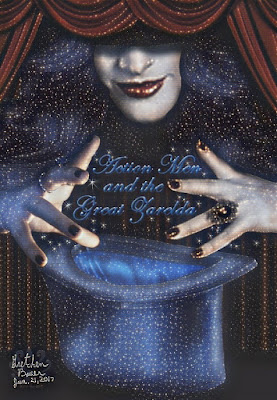 Later I played further with the poster as part of exploring different textures on a free picture editing site called Lunapic. I played with the Japanese wave filter, and the space filter.
Posted by Pearllight at 12:18 PM