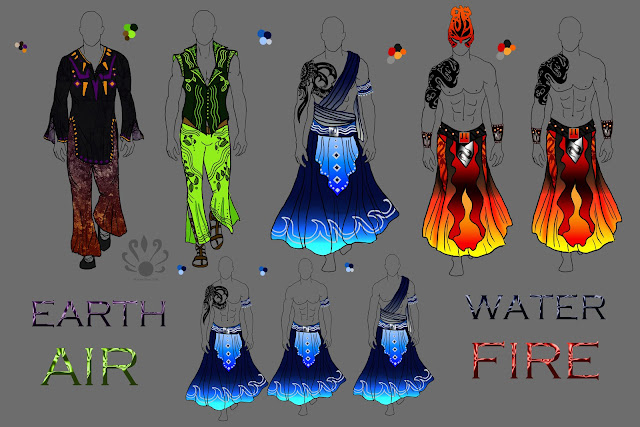 The four elements, based off the traditional color schemes for the elements in the Bionicle universe. As mentioned in the Onu Glow Weed Male fashion design  I decided to take the outlines of those designs and apply different themes to them.

I saw how fitting just the outlines alone were for the four elements theme, something about each one just seeming to lend itself to the concept.
Out of all of them, air is still my favorite design, but water had to be the most eye catching to me as I worked on it.
I Found myself glued to the screen when I discovered the perfect gradient for that glowing bottom edge of this fancy tribal outfit, and went through accessory stages which I displayed beneath the main one.
I liked the way it looked as just a skirt, then I added a sash, and played around with making a hand designed tattoo pattern.

Each design excluding earth, contains subtle symbolism relating to Bionicle. The three wavy green line patterns for air with accents of plants for jungle, the horizontal wavy line with ocean waves and symbol on the belt for water, and the fire emblem on the belt plus symbols on the bracelets for the fire costume.
I even experimented with adding a fire Glatoran helmet to the fire costume, just for interest. The tattoo and fire designs on the costume are Glatorian symbols from the Bionicle universe, and I found they made nice accents.
Posted by Pearllight at 1:54 PM