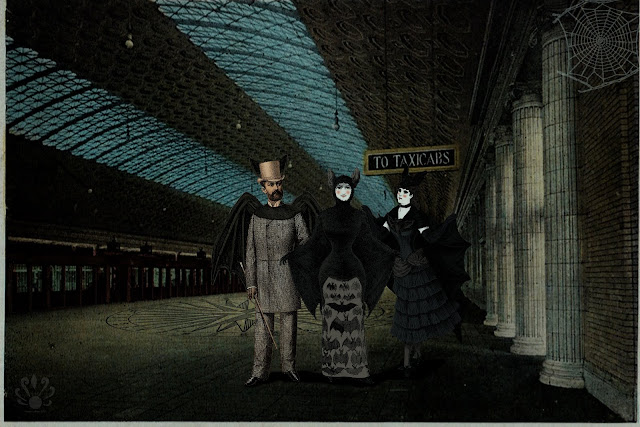 My original idea for this was to make a city scene and call it something like "Night City", but materials for that kind of picture weren't readily at hand. So instead I used a postcard image of a subway station and added in my batty travelers.

I imagined a city, an entire universe even, where the cultures are based around night dwelling creatures. Some choose bats, some raccoons, some cats, others possum and many other choices such as flying squirrels.

The inspiration for this specific idea of people walking around in bat styled clothing came about because of my recent indulgence in watching The Batman cartoon series.
Last night I dreamed of myself as a basic character in an episode, imagining Bruce Wayne to have visited my small apartment to discuss his interest in a few art pieces I've made, wanting to add a few to his so called modern art gallery. I then imagined him viewing a picture on the wall of bat people touring a city, asking if he can buy a print, enjoying an art piece that reminds him of his night job. Little did he know that my character made it because she was inspired by the Batman.

This day dream also came about because of a small thought of what if Batman lived in a city where it's normal to dress up as some kind of night creature and run around town in it. Everyone has a right to be a weirdo. :P

It's in this day dream that I embraced the idea to make that imaginary image a reality, sticking to the theme, but changing up the surroundings for "Night Life".
Posted by Pearllight at 10:39 PM