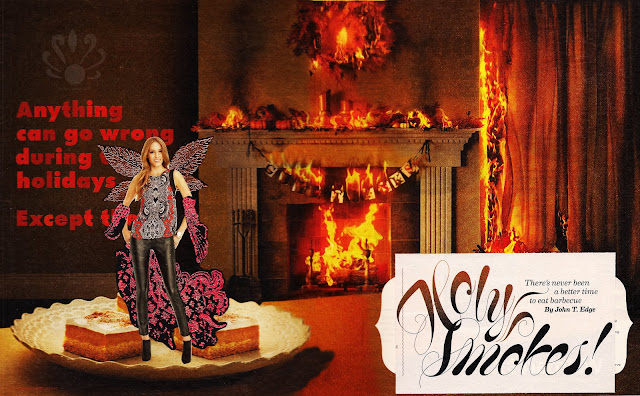 At the beginning and near the middle of the month I spent a week just doing collage, managing to create seven before wearing down.

Fire Fairy Holiday was the first to be made, created using flier images, scrapbook paper, embossing, and jell pen.

I had been rummaging through my papers, and found two pictures that inspired me to make something fire themed. Somehow the background and character came together in such a way that the woman served best as some kind of mischievous fire fairy there to roast more than chest nuts and turkey during the holiday season. She spells disaster for the holidays, ready to eat your cake and cookies if you leave them on a plate.

A funny backstory could come out of this. Some leave cakes and cookies out for other mythological creatures like Santa, but what would be the down side? Perhaps if you don't burn that special yule log with some herbal twigs that clog the nose of the fire fairy, she'll smell the sweets and fly down the chimney for something to eat, spreading flames along the way. 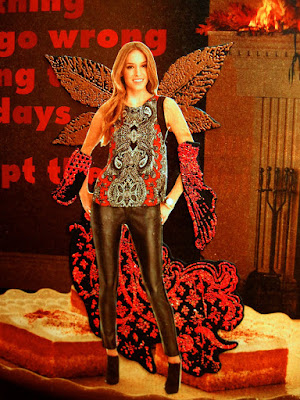 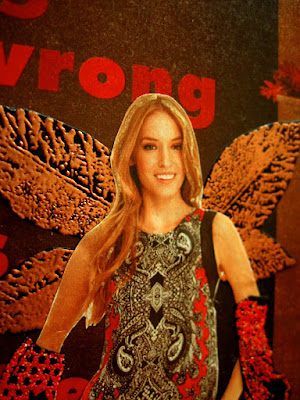 I used black scrapbook paper and embossing powder of copper and sparkly red to create the wings and gown of the fairy. It's not easily noticeable unless you see it for real, but I added some sparkly strands of hair to her head as well. 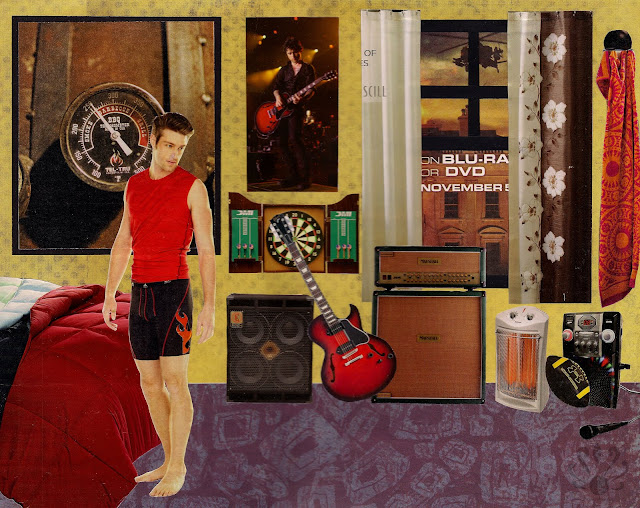 Fire song was the second collage I tackled, wanting to put the hansom guy in a picture. At first I was unsure of what environment to put him in, but as I went I found pictures which served well for a small apartment room with the main focus being about warmth and music.

at first I though I would make the guy some kind of fire guard from the planet Fluce, a mythical world I thought of many years ago. I decided to change up the setting though when I found I had materials for an interesting apartment instead.

I used fliers, magazines, and scrapbook paper to make this picture. All I can figure is this guy likes to work out, plays guitar, composes music, and is a fan of the guitarist on the wall poster hence why he has the same styled guitar. Who knows, maybe when the man isn't playing music or throwing darts at the wall mounted board, he actually is a guard....possibly a security guard.

It's unfortunate that his nose suffered some damage during art process. I did my best to cover it up with some peach marker. Guess I can say it's a scar or boo boo healing up. 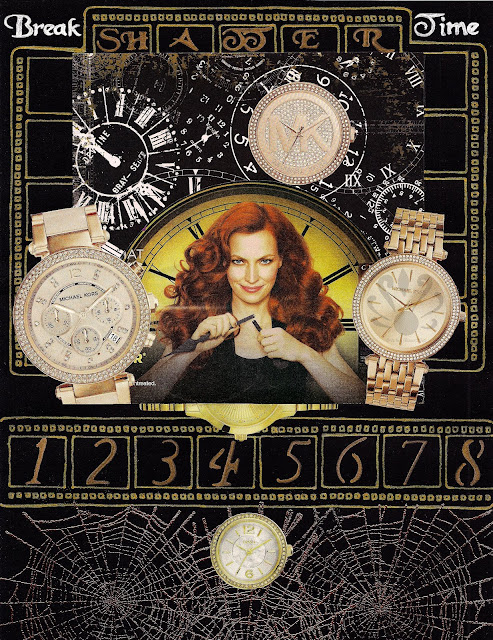 Break Time is a mixed media piece made from flier images, scrapbook paper, jell pen, and embossing. Sadly the colors of copper and gold aren't captured well through the scanner.

I wanted to make something steampunk in style, my inspiration based around the woman breaking the clock hand. The general theme is to break time, shatter age. The way the woman looks with her almost menacing gaze makes me think of a witch from Stardust, a fitting role since they all seek to stay young forever. 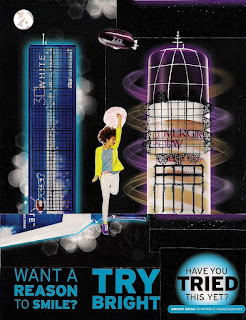 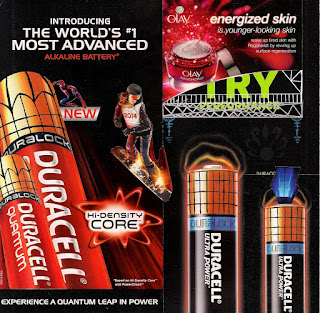 Bright Night City and Light Board Race are two collage pieces inspired by the concept of Neon City. I've had the idea to use some flier images of certain products which reminded me of city buildings.

Bright Night City just makes me think of a night on the town, having a good time no matter who's looking, feeling happy and in the spotlight in a city that's always glowing. I used a toothpaste, makeup, and bleach ad for the buildings and reflective street. I imagine Neon City to have shiny black streets that reflect the light.
The sleeping pill blimp was a fun addition, and the moon is made from photo paper and marker. This was also my first try at using Stayzon ink for stamping. It's very helpful for stamping on glossy paper.

Light Board Race is made from battery ads, the buildings suppose to be energy towers and power plants of this mythical world.
A well known hover boarder speeds her way through the sky after base jumping off the highest energy tower she could find. Why Spider-Man is following her, who knows, perhaps she's wanted for base jumping off energy towers with her electrical board. It's a dangerous sport. I added Spider-Man more so to balance the colors of blue and red.
since the energy towers are so prized, even ads for beauty products have to do with energy, hence the floating billboard for energized skin in the background. The floating billboards even have railed platforms so tourists can ride on them and have a tour of the city. 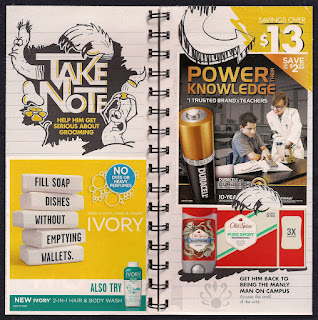 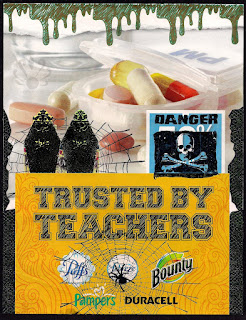 "Hygiene Chemistry" was a basic collage with very little purpose other than to keep a few images I liked, the college notebook sketches, stacked soap, and pleasant classroom image caught my attention. I cut and paste things together and in the end the subject became about hygiene and chemistry.

"Teachers Beware"....this one is symbolic, and can mean a number of things. It could connect to a story, a story about teachers being poisoned by a principle with a personal grudge. Or it can relate to other things like not trusting anyone who requires you to take something that could be toxic to your system. For a less dark concept, this collage could also fit the theme of Monster High dolls, making the coffin shaped bottles more fun.
I used scrapbook paper, flier images, embossing, stamping, and jell pen to make this.
Posted by Pearllight at 5:29 PM