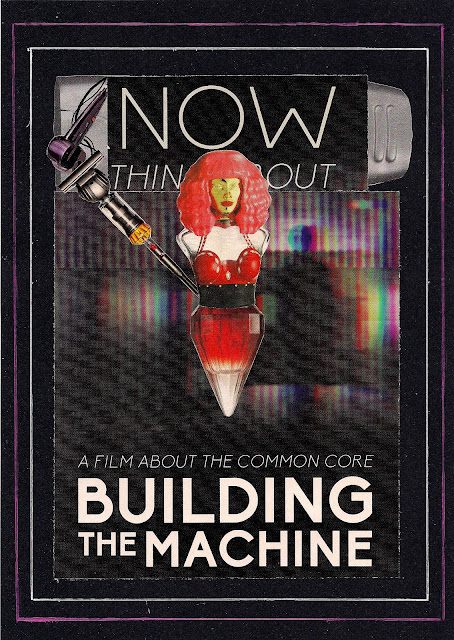 Building the machine, a collage that I hope to include in a series of collage pieces not yet made. I plan on calling the series Neonopolis (Neon City) as part of my Neon City concepts.

Eventually I may include these pieces into my Neon city journal if they fit.

This collage was rather fun to make, and surprisingly spontaneous as I grabbed for images in front of me that all came together.
I enjoyed the mysterious feel of the background, giving it a spooky space like a dark room with a form in the background, which either is a scientist or a fully built android.
Building the Machine was a perfect title choice and I used clip art of perfume bottles to make my levitating lady bot, her form not complete.
I used images of a hair tool and vacuum cleaner to make a robotic arm with a magnetic needle, a devise which holds onto the android so she doesn't float off while the rest of her is being assembled.

The concept has left me with many ideas, and I hope to be sharing my progress of this series as I move along.
Posted by Pearllight at 1:07 PM No comments: 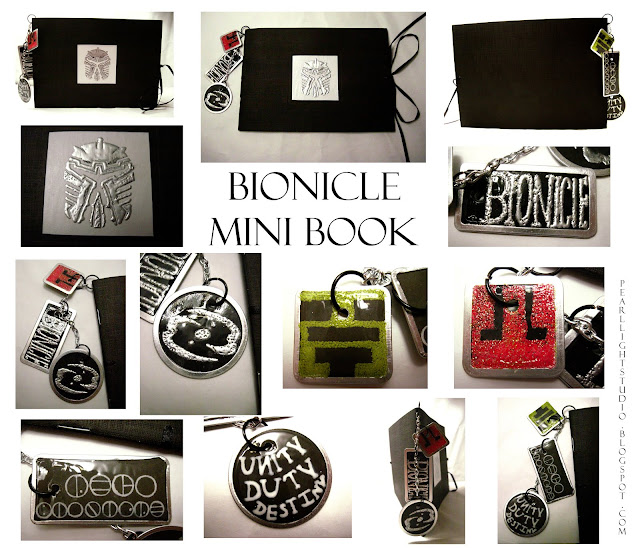 A fun combination of two interests, Bionicle and book making. This mini album is a great place to hold MOC pictures or art pertaining to the theme. 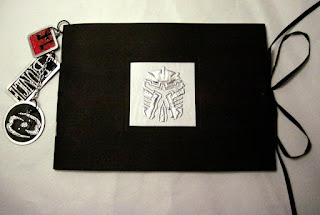 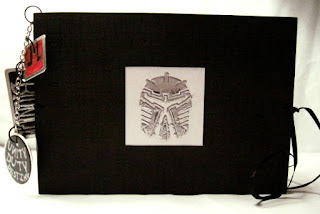 I've had this pre-made mini album in my paper pile for awhile, always planning to use it for something like this, just had to decide what to put in the picture window.

I went through several ideas, one was to add the Mata Nui robot form in the middle of some light rays, or possibly put the three virtues symbol in the window, but in the end I decided the Ignika was a good choice.

During the process of making this book, I came to realize the main reason I've held onto Bionicle as a fandom for so long is because I like the artistic aspects of it, everything from the designs, colors, symbols, and themes. 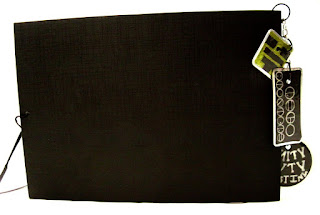 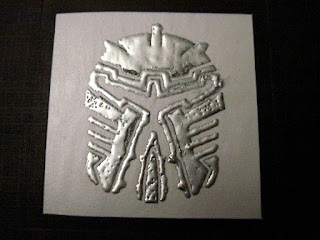 The back side of the book is plain, I kept it simple and liked it. I'll note the Ignika design was fun to make into an embellishment; I'll explain at the end of this post how I did it. 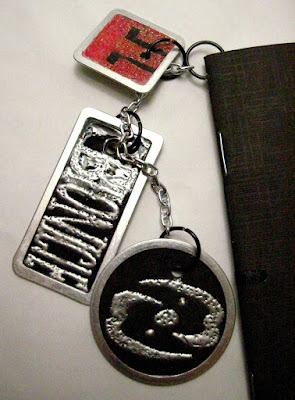 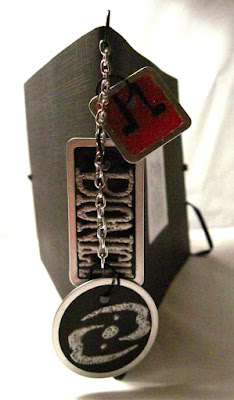 The book needed charms, thankfully I had this planned too, and got to use some pre-made paper charms with metal frames I've been meaning to try out.

I added the charms and chain using some black jump rings. 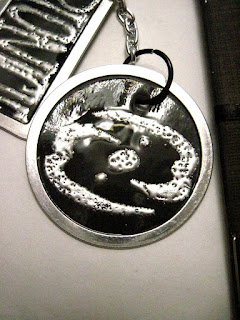 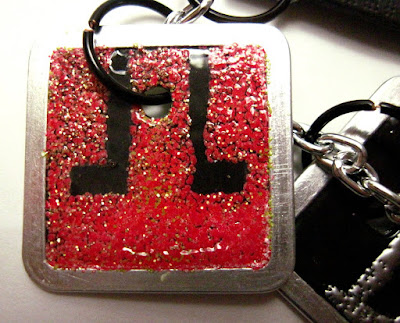 The three virtues symbol and Tahu's fire symbol were embossed onto the charms using silver and sparkly red emboss powder. 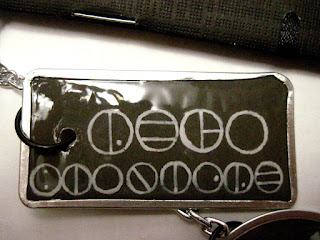 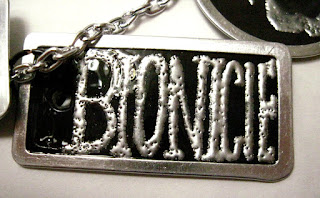 On one side of the rectangle charm I wrote in white jell pen (LEGO Bionicle) in Matoran lettering, on the other I embossed the word Bionicle in my own text style. 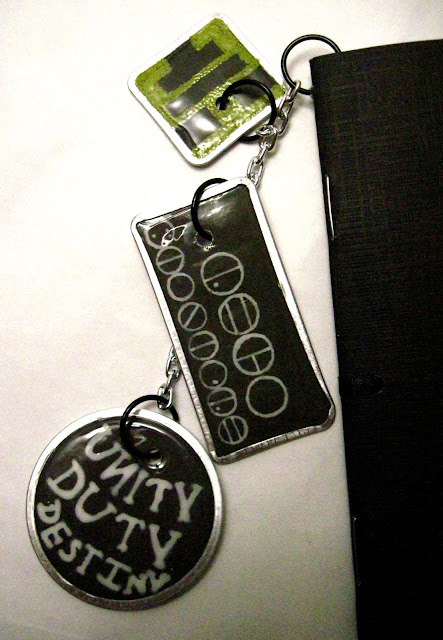 I liked adding two sides to my charms. 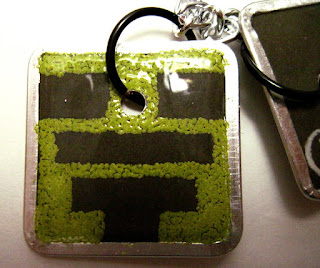 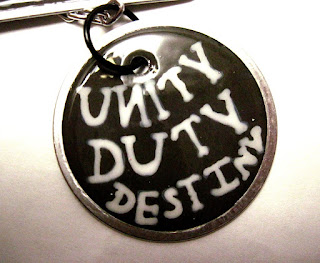 On the other side of the element symbol charm is Lewa's symbol, embossed in green. I chose Tahu's and Lewa's symbols because I had the powder colors for them, plus I like Lewa, and Tahu is the poster character for Bionicle. 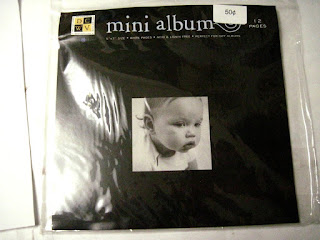 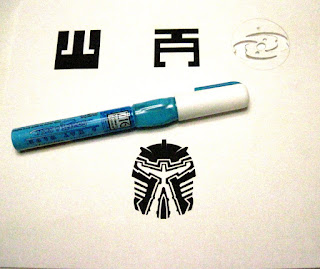 Onto the details. The mini album is a DCWV mini album with picture window, which means I didn't have to assemble the book, it's complete with blank white pages.

The more enjoyable experiment was embossing the designs of my charms and main picture. I did an experiment to see if you could emboss using a ZIG glue pen, turns out you can. I drew over the designs and lettering of my charms and main image using the glue pen, then poured on my powder. Because the tip of the pen is relatively small, I was able to pull off tinier details, no longer needing to use a liquid emboss adhesive and paint brush to emboss a drawing or object.

I will make one note though, the melting process may not be entirely smooth like it would with actual emboss adhesives, but I find the texture to be charming anyway.

To finish off my charms and window image, I used glaze and glues. I sealed my window image with Liquitex gloss varnish. and for my charms I used Mod Podge dimensional magic.
Posted by Pearllight at 6:35 PM No comments:

Email ThisBlogThis!Share to TwitterShare to FacebookShare to Pinterest
Labels: journal 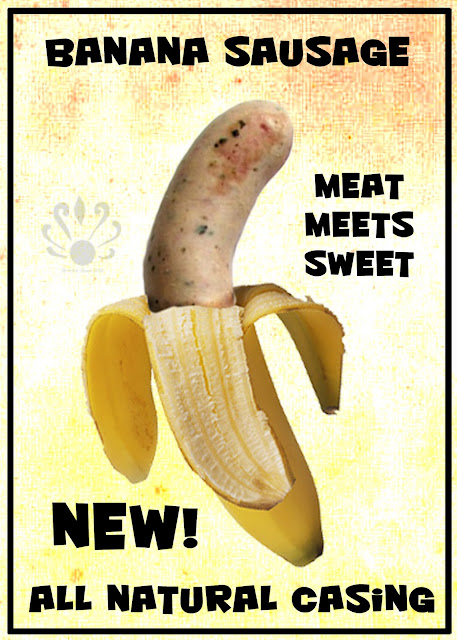 Though it may sound like a tasty breakfast sausage, you wouldn't expect to see it like this.

This idea was entirely random, just popped in my head one day while I looked at a package of raw sausage, the way they curve reminding me of bananas.

Because I enjoy faux advertisements, I played around with making this card look like some odd grocery store poster, advertising the new all natural casing of banana sausage with bold excitement. Talk about GMO, or maybe this is a funny way to advertise sausage containing banana bits. xP
Posted by Pearllight at 9:03 PM No comments: