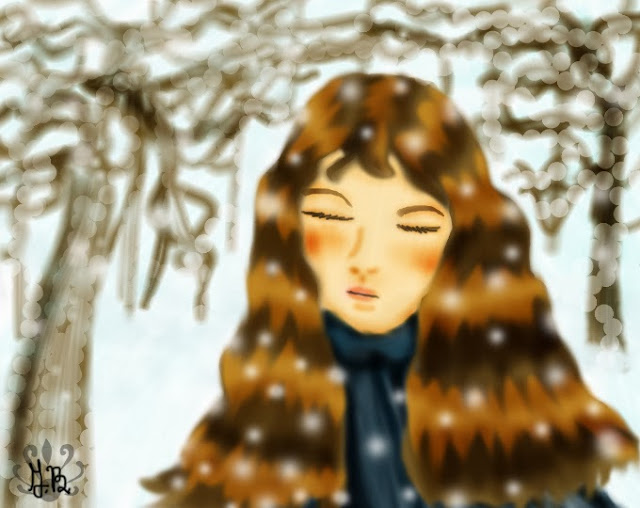 Through the forest on a snow covered path, walked a girl with dreams and a heavy heart. She closed her eyes and stood still as the snow fell around her, and wondered why things seemed so dead, so sad. Was it just Winter making her weary, or was it her longing for escape? In her heart she wanted
more; she wanted to live, not exist, and longed for physical companionship she no longer had. Her heart became so weary in this chilled moment of time, that she felt like if she never opened her eyes, the cold would help her sleep forever. But no, she would not give into the cold, she forced her eyes open, and suddenly remembered how many more chances she had to try again, and that the cold was like a mournful emotion; it hurts for awhile, but eventually things get warm again; you just have to bear the cold for awhile, and find something to help warm you till it's gone.

The little story clip above is just an extra, it's what I feel when I look at the picture. Maybe someday I'll use the picture for a story purpose, who knows.

Improvements on the image were rather simple. Original version (below) just needed some shading and smoother hair. In some ways I feel like the original makes you feel a bit colder, but it also seems a bit too scraggly and dead. The girl is after all meant to look chilled, not frozen....
To fix this I colored a smoother head of hair over her scraggly strands, and then smudged the colors together. This helped make her hair look warm and fluffy, rather than sticky and wet.
I then improved color by shading her face and cloak. This greatly helped in bringing life to her skin, and made her cheeks look very cold. Then the last detail was adding in snow dots to make it appear similar to the original. 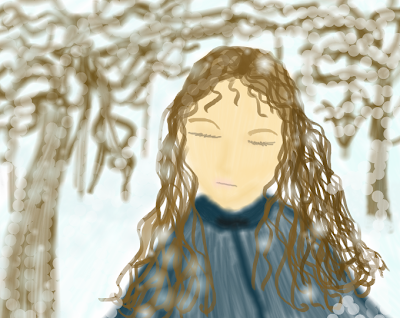 Image dates back to about 2006/7. And was originally made in an Open Canvase program. Future improvements were made in Photoshop Elements.
Posted by Pearllight at 12:43 PM