Angel In the Sky 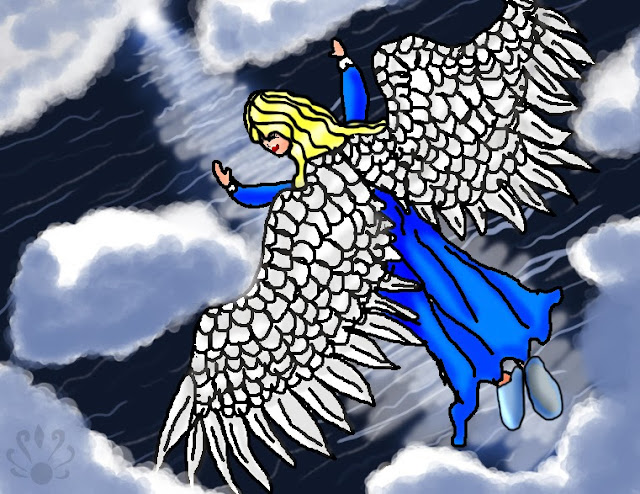 Angel In the Sky, another improvement made to old work dating back to at least 2005/6.
I'm quite happy with how the background turned out, a great improvement in comparison to the original image (below). I sort of surprised myself while experimenting, didn't really think too much about the backdrop and just did it. I used textured brushes to make the clouds and added in some ocean waves with moonlight reflection.

In the end I stood back and looked at my background, and saw that it was better than usual, like the more I play, the more in tune I get with lighting and texture. Unfortunately I now wish the angel looked better, but this project was meant to be an improvement to old work (obviously), not a complete paint over. Thankfully my background layer is separate, which means it can be used for other things, or be displayed on its own at a later time.

Not sure why I felt night time and ocean waves fit the mood better than day time with squiggly clouds; but the more I looked at the  original picture, the more I felt it needed an ocean, and would look better at night. I played around with cloud cover, made it so they surrounded the angel, while still leaving room for the moon off in the distance. Originally I wasn't going to put a moon, but it seemed needed and natural once I added glow on the water.
My first intent was to make moon glow on the ocean, and leave it assumed that the moon was above where you couldn't see it; but that just felt off to me, so I added the moon in the distance.

Note, I added extra hair and a pair of slippers to my angel for two reasons. The extra hair was for adding more bounce and to cover up the fact that my angel doesn't really have a neck; the slippers were added to make her feet look normal. The rest was just shading and lighing, and that's it.
I have a small story idea which came to mind after I improved my picture. Could be that this angel is a young girl who went to bed and dreamed that she could fly, and had wings. So she traveled the world and soared over the ocean towards the moon, her plans to explore beyond Earth. And near the end she finds she can never reach the moon, for it's too far away and never gets closer; then she wakes up and smiles that she had an adventure without ever leaving her bed. ^.^ (This idea would help explain why this angel is wearing slippers and a nightgown).
Posted by Pearllight at 1:08 PM