So I've been posting a lot of black and white pictures lately. I guess I just get in those moods for gray shades and dark clouds. My newest image, yet another product of Photoshop and all its brush textures, is a result of wanting to make something and portray an emotion while it's happening. "Rain On Me" is a result of my not so peppy mood as of late, partly because I've been spending way too much time at this screen with very little option of escaping for awhile.

I guess the picture is a symbol of current mood; gray, tired, waiting for something new and finding nothing... or something like that.

This newest sketch gives me a reason to say, the internet leaves me deprived. Here's the thing, for all other artists out there to hear; if you have something arty to attend, if you have time to meet up with arty friends that you actually care about, if you find that you have something good to do and you have viewers on the internet or in real life... you're lucky. Lots of people have their down days, I have them all the time, and that's because where I live. I dream to escape, start a little artists coffee shop somewhere, talk with people who have a sense of humor and know where I'm coming from, and just live in peace. Which, at the moment, and for nearly 15 years of my life, hasn't been an option. The food where I live is terrible, there are no art places to visit, people have no sense of humor and don't know how to be creative and share ideas, art shows are non existent, and my state is like death for a creative mind. I read on the internet and other places, and I always feel like everyone else is at least gaining small opportunities, while I sit around and am deprived of few if any.

So.....current mood of THIS artists; wanting escape, wanting creativity, creating and having a lot of ideas, but swaying near the edge of a sour feeling.

Posted by Pearllight at 5:10 PM No comments:

Okay, so it's been rainy, then turning really cold, then dropping large chunks of wet snow. So today I'm going to take the weather forecast and use it as an excuse to share yet another emotional image which I recently improved. ^_~ 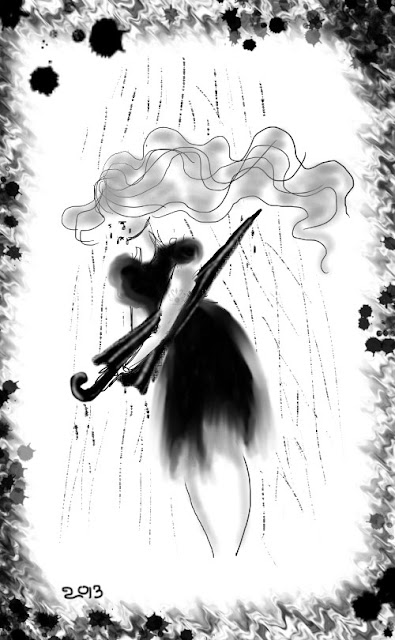 Improved just a few days ago on the 22, this emotional image was originally something else. I made the weeping girl in this image before I made "Drop the Rose". Both were made during a time of shifting in my emotions. Again it was simple, quick, and made to express a feeling in the fastest way possible. Originally the image had a far darker expression to it, and was actually called "Stabbed At Heart" before I made improvements. The original image was made in the swing of a moment, and I didn't really care how it looked while creating it, I was making it simply to get my emotion out. Before the improvement, the umbrella was actually a spear, and the image, like I said, was very dark and made for a mood in the moment. Later on when I looked back on it, I felt it was a little too dark, so I went back in and made the spear an umbrella, turning it to a sad scene of a girl crying in the rain, with an umbrella at her side. It's during this process that I started playing with some textures and different options in Photoshop, to get that rippled wet look as a border and used a special brush for the ink splotches. Final touches were the rain drops, added by the use of a pencil option in the program.

After those little improvements, I feel the image has become far better than it was before, and expresses the same emotion I was trying to express then, but with a little less darkness involved. I'm now glad to say that I'm happier with this picture now then I ever was before; and the water effects came out better then I anticipated. ^.^  I'm sure every artist out there has art pieces they decided they didn't like later on, and here's my advice; don't give up, just improve it! ^_^
Posted by Pearllight at 5:38 PM No comments:

Drop the Rose, leaving past behind 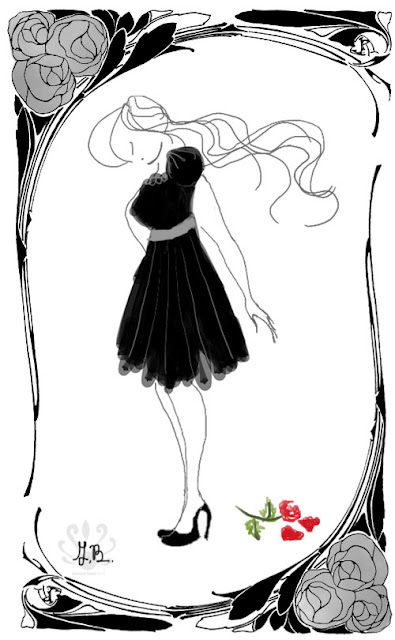 There are some days where as an artist you feel emotionally moved with either a good or bad feeling; this image is a result of those not so on top feelings, that I made several months back.

With just a smooth, quick movement of the digital brush, I expressed my current mood as quickly as I could. Originally the picture didn't have a border, it stood all alone on a white surface, so I went in today and gave it a pretty frame. I made the frame's roses gray like the band on the dress. The whole idea was to make the red rose stand out as the most important part in the picture.

In short, the symbolism in this simplistic piece is quite deep. At the time of making it, I was facing a new turn in my life. After losing a friend I held dear, I realized I needed to let it go and move on, so I made a picture expressing that emotion in a symbolic way; the girl being a representation of me, and the rose representing my friend. And there you have it; art is a wonderful way to express your emotions, and portray turning points in your life in a beautiful, symbolic way that says it all without saying a word. So go ahead, no need to worry about how quick it comes out or how perfect it is, sometimes you just have to express yourself in the quickest way possible, and get that emotion onto the page. ^.~

Posted by Pearllight at 4:45 PM No comments: 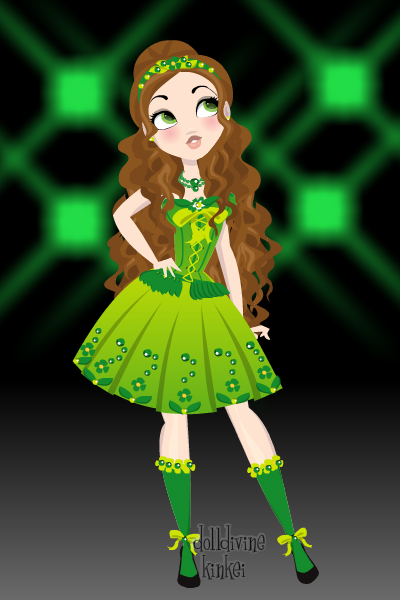 Oh boy..happy St. Patrick's Day everybody! To brighten up the day here's a cute outfit design I whipped up one night on dolldivine. A sweet Irish dance dress, designed specifically with me in mind. I had a different color combination in my mind before I designed it on dolldivine. At first I thought of a mint green jacket with a flared bottom, worn with a pink dress, but it sort of weened to the green and I got something more festive. I still plan to design that other outfit idea, but at the time was feeling too sluggish.

And to top off the cute costume design, since no Irish dance outfit is complete without a little peppy music, here's some festive Irish music from one of my favorite male Celtic bands "The High Kings".

Enjoy, and have a wonderfully green day! ^_~ 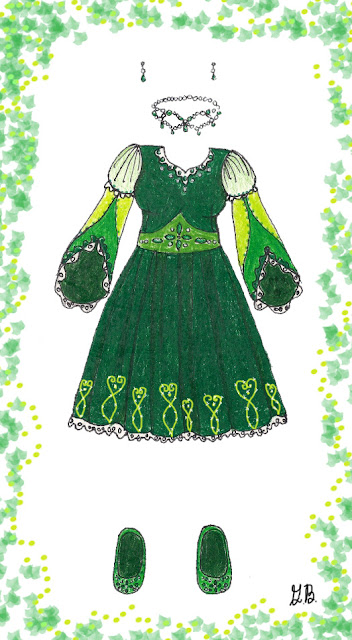 Many times fashion designs pop in my head during day dreams; this outfit being one of them. One day I started thinking about two things I like, emeralds and pearls; first I started out with an earring and circlet idea, then I thought about what I could wear with the jewelry. In my day dreaming I sketched up an outfit, and before I realized it ended up with an Irish princess costume for dancing in, with a little bit of my own flair thrown in. I could just see myself wearing it, and then thought of what slippers could match it.

The border and skirt details were added later. I felt it needed some extra green to give it a pop. Originally I drew the swirly skirt designs with a sparkly jell pen... unfortunately it didn't show up during the scan, so I had to go back in digitally and add that detail again. You can see below what the image was like before I tweaked it's details and gave it a frame. Still cute, just needed that extra pop. ^_~ 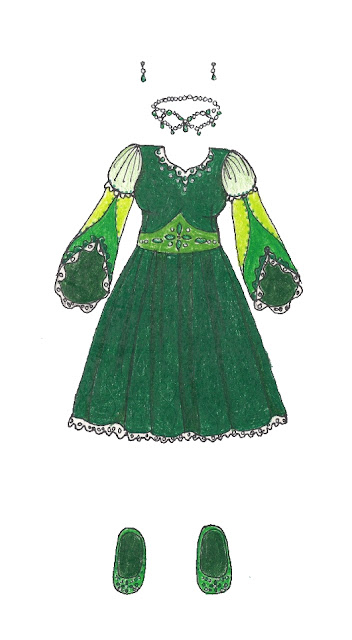 Posted by Pearllight at 12:51 PM No comments: 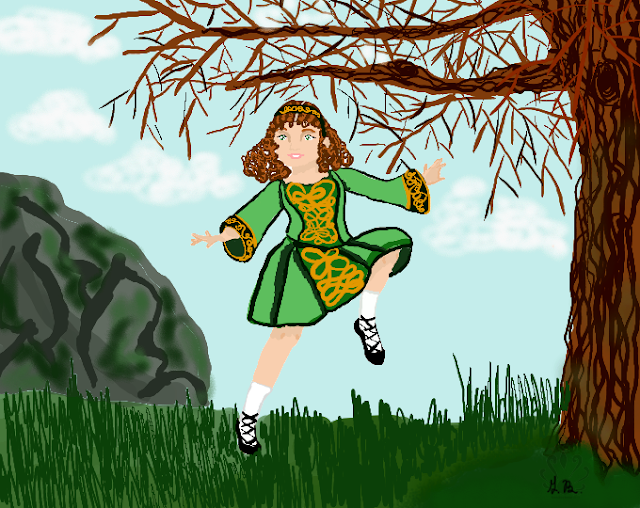 Here's an old image I did when I was much younger, of a little Irish dancer. At the time I had little experience in the workings of paint programs, so the picture is rather squiggly in detail.

My inspiration I do believe was based off an Irish Dance costume I had for my American girl dolls, and I wanted to make a lively picture based off the cute costume. Though the picture isn't well defined in some ways, it still portrays the emotion I was going for; a lively little dancer prancing around in the green grass of home land fields. Kind of has a story book feel to it, like it attaches to a bigger tale and this is just a peek at the ending of it. ^_^

Here's a peek at the inspiration. A sweet little dress I loved putting on my Elizabeth doll, and I use to put her hair up in pig tails with little green ribbons for extra flair. See the resemblance to top image and costume? There you have it, childhood inspiration with a festive twist. ^_~
Posted by Pearllight at 5:14 PM No comments: 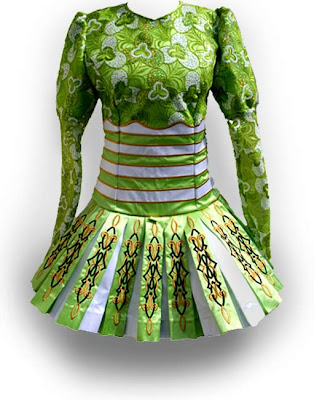 Since St. Patrick's Day is this coming Monday, I felt like sharing some festive Irish dance costumes that I enjoy. Images I collected are from online, and the credit belongs to those who made the costumes and shared them on the internet; I'm just sharing the ones I enjoy.

I really like the pleated skirt on the dress above, and the embroidery is a major plus on something I would wear anytime. I love Celtic knot work, bright green, and sparkles; so these dresses are just my kind of fashion. 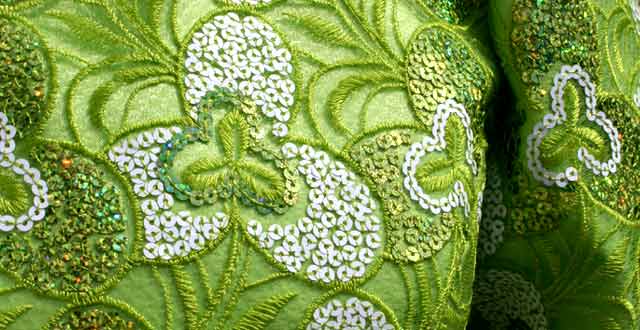 These two pictures are close ups I found for the dress above. 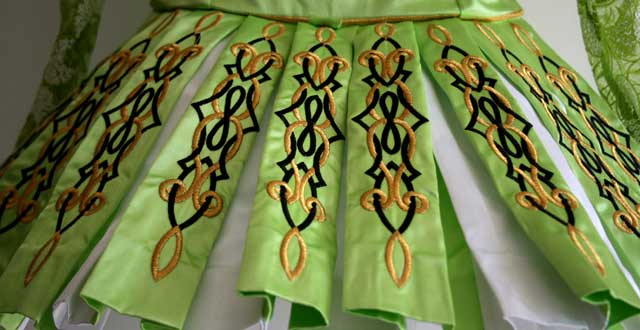 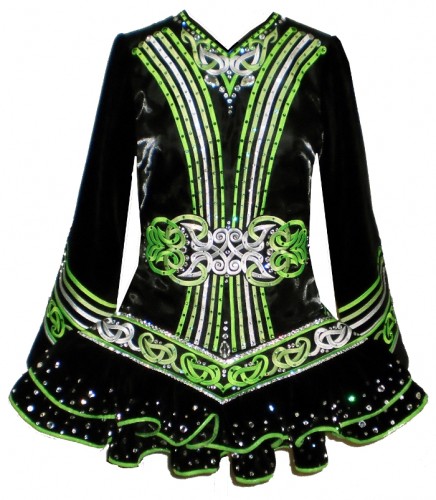 This black dress has to be one of my favorites that I found. It's knot work and outline is just stunning. I would love to wear this one. It sort of reminds me of a scifi themed dress mixed with Celtic lore. 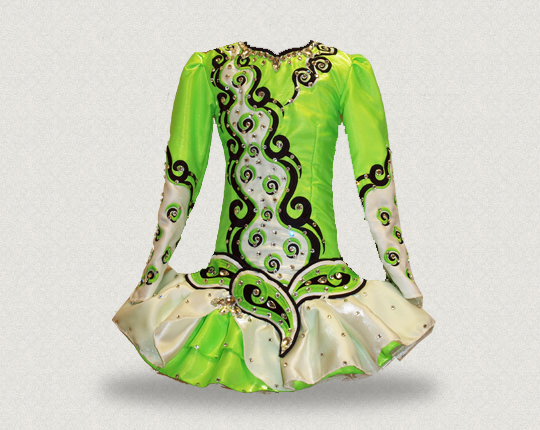 This dress is fun and swirly.. though the elongated torso isn't quite my taste, I love the layers on the skirt, and the designs that swirl across the chest. 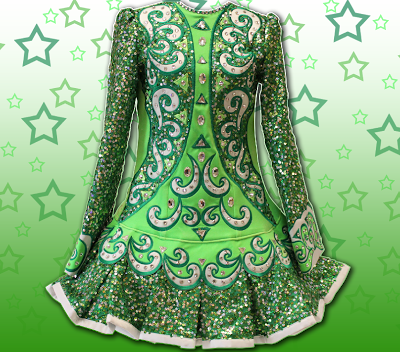 Last on the bright green dress list is this swirly, somewhat cottagey looking design, which has a great design set on the bodice and lower skirt edge.
Posted by Pearllight at 9:37 PM No comments: