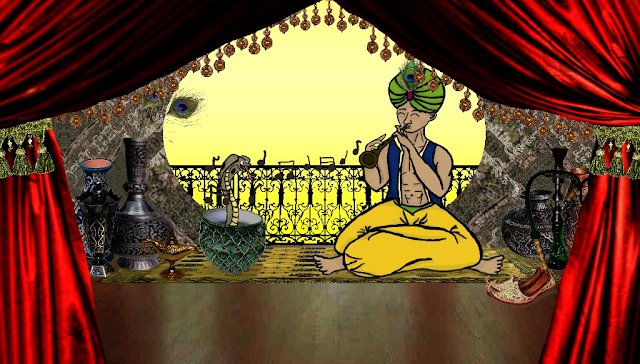 This weeks word mesmerizing caused my brain to stir, and I ended up with a silly idea.   What better image than a man playing music, causing the snake to be stuck in a trance while the notes float around his head.

It might be sorta hard to notice the swirlys in his eyes, but trust me, they're there, the image is just small.

A few extra details:
This is predominately a digital collage, but I hand drew the snake and man playing ; then scanned the page and digitally colored them in. I guess I was just feeling lazy, and also didn't have a whole lot of time to hand draw and color all the textiles and stuff.

Ok, I sorta cheated, no big deal. Besides, I'm really starting to love this art form for so many reasons. No worries though, I will always love real media and art styles for many projects to come. 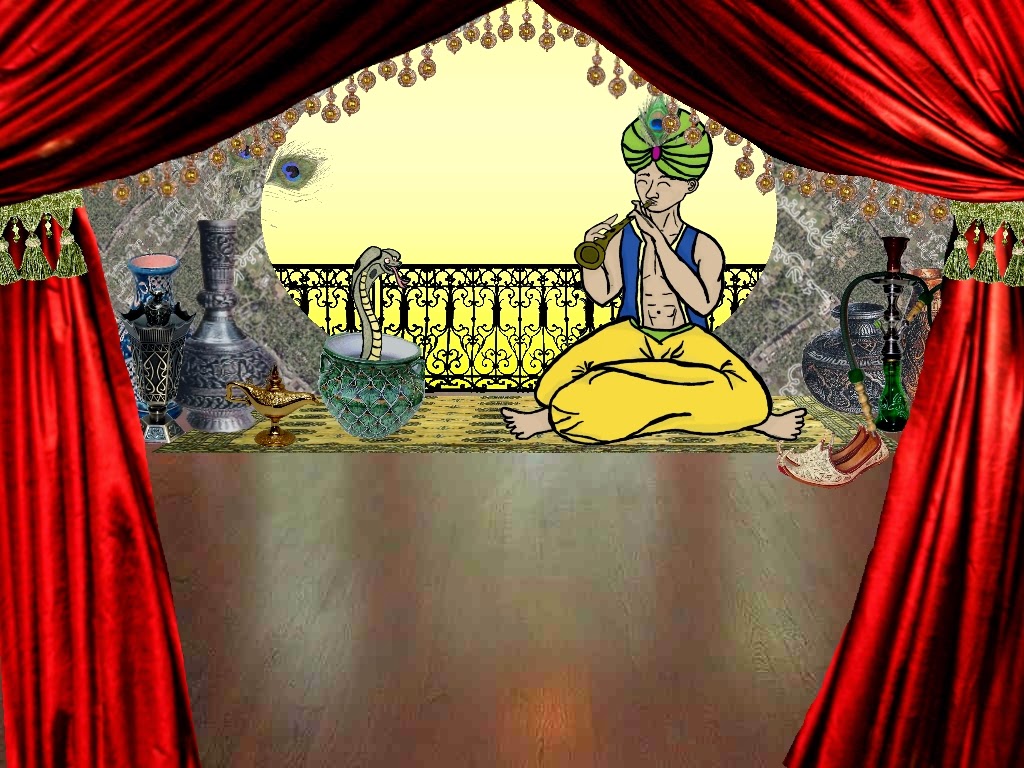 Also (above) is what the picture looked like before I added necessary shading, musical notes, level tweaks, and cropping. I felt cropping the image helped you focus more on the man, not so much shyly watching him from a distance.

Hope you drop by and have fun viewing. :)
Posted by Pearllight at 3:08 PM 1 comment:


This video is late, I know. But at least I finally made one. This is the first personal video I've ever posted to my blog.  The video is for the 12 pages I did for the Big Idea Festival on BPC. I'm not sure if it's very good, but happy viewing.
Posted by Pearllight at 6:17 PM No comments: 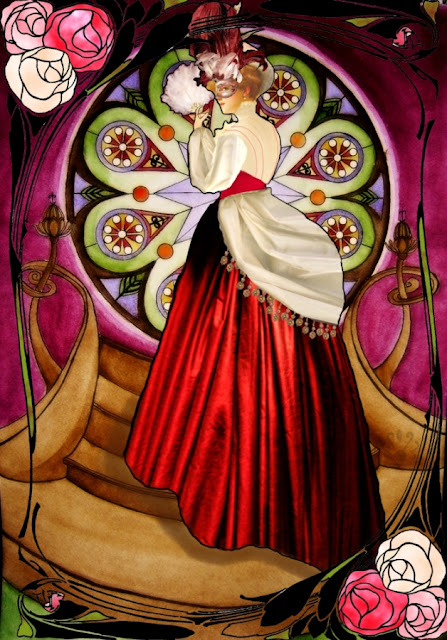 Originally I started working on this picture for the word "Disguise" for last weeks word; unfortunately I wasn't able to finish it in time due to our power going out for three days during hurricane Irene. I was so happy to find the new word of the week fitting for my project, since ladies in red and masquerades are mysterious.


Can you guess who the lady might be.....having trouble, why who else other than Madam Valentine. If you've seen the picture titled, "Madam Valentine's Holiday" you might ask yourself where my mysterious opera singer character was going on her holiday. Well I'll tell you, she was going to a masquerade ball to hide herself from the public for awhile.


I didn't actually intend  for this picture to connect with that story, but it did. As I looked at the woman's face and how similar it was to the one at the train station, and how I couldn't stop seeing this lady in red, I realized it's because her similarity to the lady I used in my older work. Thus leading to the connection of where Madam Valentine was going for her holiday.


My original intention was to purely do this entire picture with actual media, but time getting thin and the painted background taking so long, I decided to do most the work digitally, all except the background itself which I made by hand. Not to mention I didn't want to spoil such a pretty background, but rather save it as a prop for stop motion. 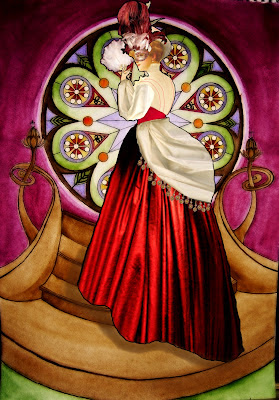 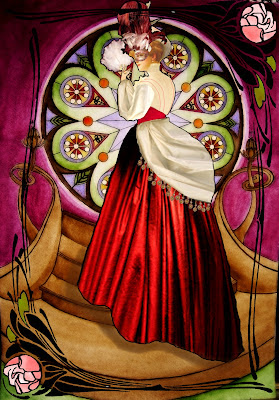 I also wanted to include the other framed version I didn't like as much (left) , and the unframed version just to show what the image was like alone (right). To me, the main image is the best because it fully frames the picture, and draws your attention to the middle. 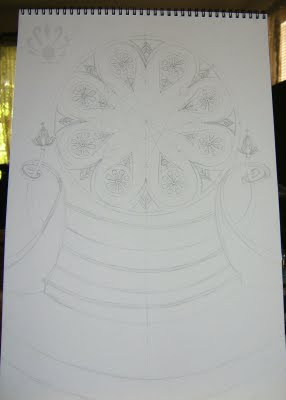 As you can see here I'm showing you the step-by-step process of making the background. First I took a very long piece of watercolor paper and drew out my design. 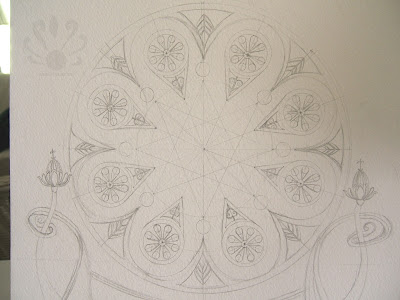 I had fun doing the window, which was both enjoyable and a pain all at once to draw. 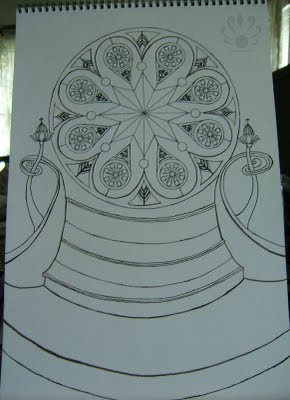 After all that was over I went in and inked it. 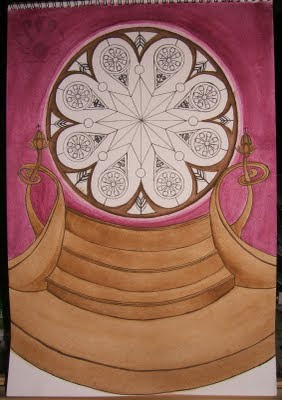 In painting steps, I painted the wall with acrylics first, then worked on the stairs with watercolor, and saved painting the window for last. 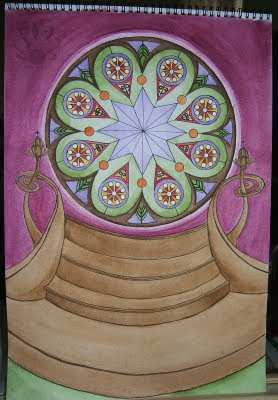 There you have it, the complete background I darkened and worked with digitally for the final piece. 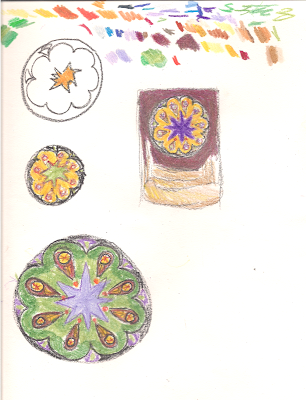 Here are some sketches done in crayon that I did to figure out color combination. The one above is the window and below is what I would have originally done for Madam Valentines dress if I would have made her by hand. The digital version came out close enough though. 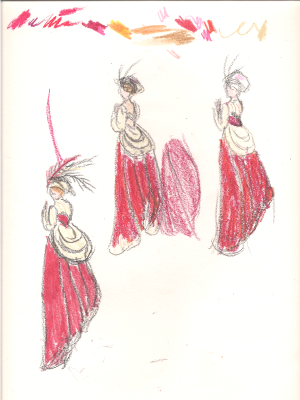 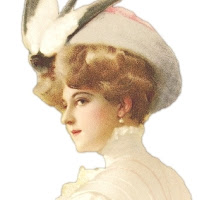 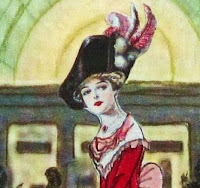 Here are the two compared to each other, see the similarities in facial structure. The only difference is that the one is more realistic and the other more stylized. But both are practically the same looking person. I guess you could say the more realistic one is what Madam Valentine looks like up close.


Quick details on the digital work, her dress and sleeve are made of curtain images that I chopped here and there to get the right shape. Her head and hand are from separate postcard images, and the flowered border is from a Nouveau book, which I then went in and added color then a little cloud effect to give the appearance of marbled stain glass roses.
Posted by Pearllight at 5:10 PM No comments: